Investors conveniently ignore bear markets that hit over the past decade

A previous version of this column erroneously reported that the 2015-16 stock market decline appeared on the bull/bear market calendar maintained by Jack Schannep, editor of TheDowTheory.com. 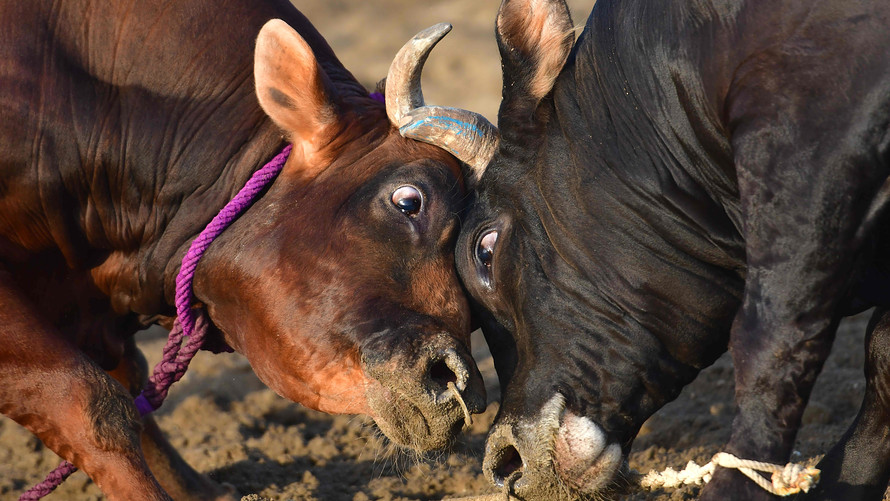 The birthday party Wall Street is throwing for the bull market’s 10th birthday is a fraud.

The revelers insist that the bull market began on March 9, 2009. Yet that bull market came to an end long ago. If we’re even in a bull market right now — and that is not for sure — an argument can be made that it’s less than three months old.

Consider the semi-official definition of a bear market as a 20% decline in one or more of the major market averages. There have been at least two, and perhaps three, bear markets since 2009. (See accompanying chart.) 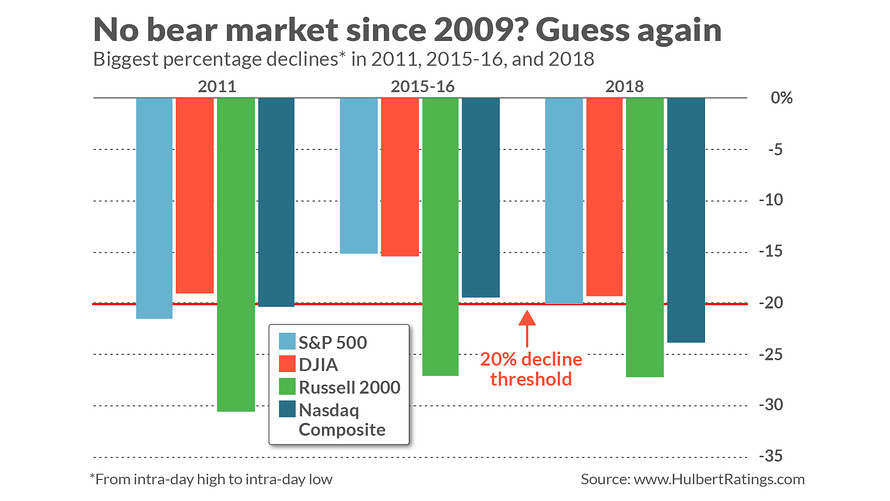 To be sure, if you focus on closing values as opposed to intra-day readings, the S&P 500 did not fall by 20% in 2011. But that strikes me as a distinction which makes no difference. Other indices did slide by more than 20%, even on a closing basis. And the granddaddy index of all, the Wilshire 5000 index, which encompasses all publicly-traded stocks, lost more than 20% on a closing basis, even assuming dividends were reinvested.

Why does the bull market’s age matter? One reason: Some worry that bull markets die of old age. If indeed this bull market began in March 2009, it would be one of the oldest in U.S. stock market history — and, therefore, so the worriers believe, ripe for an early death. In fact, as mentioned above, it’s not even sure we’re in a bull market right now, but if we are it’s just three months old.

Another reason why this discussion matters: It illustrates, once again, the power of collective delusion. If investors can be in denial about recent events as big and significant as bear markets, are there any limits at all to what they can convince themselves to be true?

It’s hard not to be reminded of the classic book on the subject, now almost 200 years old: Charles Mackay’s “Extraordinary Popular Delusions and the Madness of Crowds.” While the current delusion about the age of the bull market may not elevate to the level of those on which Mackay focused — the South Sea Bubble, the Railway Mania of the 1840s, to name two — the same underlying habits of thought are still present.

Humphrey Neill, the father of contrarian analysis, once argued that “when everyone thinks alike, everyone is likely to be wrong.” That’s because the collective group think deadens our critical faculties, and in the process we overlook things that are otherwise utterly obvious.

So have a piece of bull-market birthday cake. But don’t kid yourself that this bull is 10 years old.

More:   Here’s why lessons learned from the 10-year bull market in stocks could hurt you