This CAT is on a slippery slope

Many of us are worried about the coming earnings season. There is a concern that the economy may be about to slip off into another recession or has already slid into it. Let's take a look at a stock that is likely to provide useful clues.

That stock is Caterpillar (NYS:CAT) , and this CAT is on a slippery slope.

CAT is the world's biggest maker of construction and mining equipment, and it thrives in a robust economy. When the economy starts getting a cold, this CAT gets visibly sick, making it a good leading indicator. 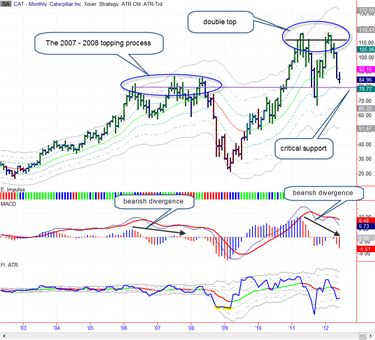 This monthly chart shows the topping process that lead up to the 2007/2008 top and a recession that followed.

Near the right edge we can see that CAT has formed a double top and is testing its support levels between $80 and $85. This was the level of the highs during the 2007/2008 top. The topping pattern in 2007/2008 had a bearish divergence pattern in place as well as the current double top. 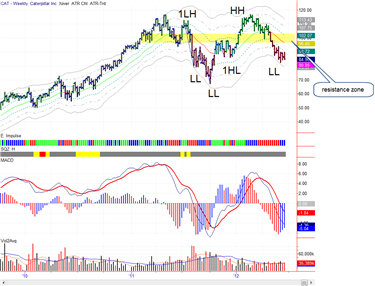 This weekly chart shows a resistance zone near the $100 level. A set of lower lows is identified by letters LL near the right edge.

CAT recently broke below the $100 zone and formed a lower low. Unless it recovers above $100, the probability is high that CAT will test its 2011 lows, indicating further weakness in the economy. If CAT cannot hold above its $80 to $85 support area, its downtrend will confirm overall market weakness and signal a further slowing in the economy. 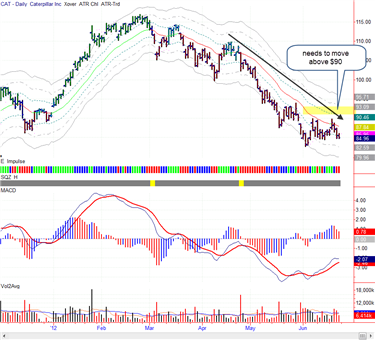 To avoid a bearish sign, the daily chart of CAT will need to change its trend from down to up and this will not occur unless CAT can move back above $90. If CAT continues to trade below $90, it'll confirm the downtrends in its weekly and daily timeframes.

This CAT is on a ledge and needs to find a solid footing soon; if it fails, it'll be a poor sign for the economy.