This chart shows how the bull run ended with a bang 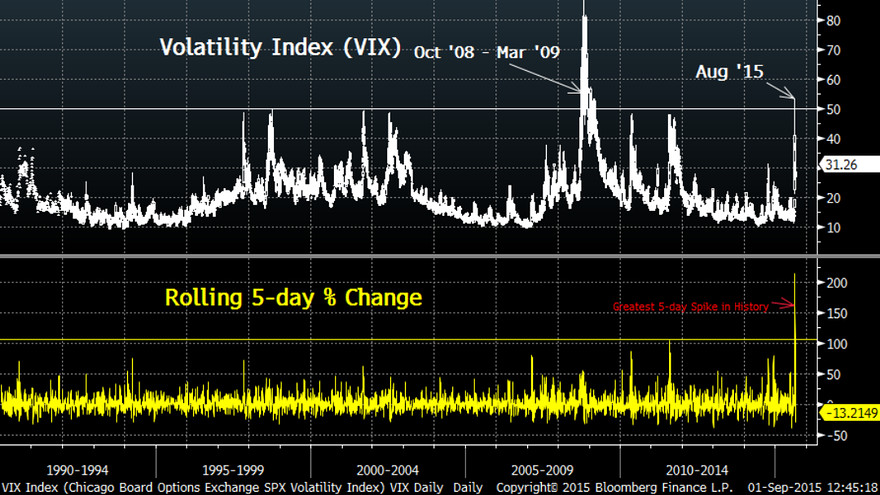 Bloomberg/Charlie Bilello
Chart on the VIX index showing how volatile markets were in August 2015.

Remember the stable, six-year bull run? Until earlier this summer, U.S. stocks were regularly logging record highs, but the good old days of steady, rising equity markets have just ended, according to Charlie Bilello, director of research at Pension Partners.

And it finished with a bang — not a whimper — last week, he noted in a new blog post .

“With the greatest 5-day gain in the history of the VIX, August 2015 will always be remembered as the example of how quickly a market can move from stability to extreme volatility,” he says, pointing to the chart above:

Fueled by concerns over slowing growth in China, the timing of the Fed’s first rate hike and volatile oil prices, global equities plunged last week. The Dow Jones Industrial Average /zigman2/quotes/210598065/realtime DJIA -3.57% and S&P 500 /zigman2/quotes/210599714/realtime SPX -4.04%  posted their biggest one-day percentage declines since August 2011, and both closed at levels not seen since 2014. Additionally, the Dow average, the S&P and the Nasdaq Composite /zigman2/quotes/210598365/realtime COMP -4.73% all slipped into correction territory in August.

That triggered the CBOE Volatility Index /zigman2/quotes/210598281/delayed VIX +18.62%  — a gauge for market jitters — to briefly spike above 50. That level’s been seen only once before, during the financial crisis in 2008/2009. Other than that, the index has been relatively stable under the 50 level, with smaller jumps during bouts of market nervousness.

“The past few years can only be described as one of the most unusually serene periods in history for the U.S. equity market. While over time it began to feel normal, we have been living in the outlier,” Bilello said.

He explained that during the bull run, there was only reward in U.S. stocks, making them appear to be risk-free investments.

“This is not how investing works; there is no such thing as risk-free reward in stocks. Going forward, the market environment will inevitably be more challenging than the recent past,” he said. “Those still ‘swimming naked’ and ‘dancing until the music stops’ take note: We’re not living in the outlier anymore.”