Both Donald Trump and Kamala Harris cursed in public recently as political swearing has hit an all-time high. 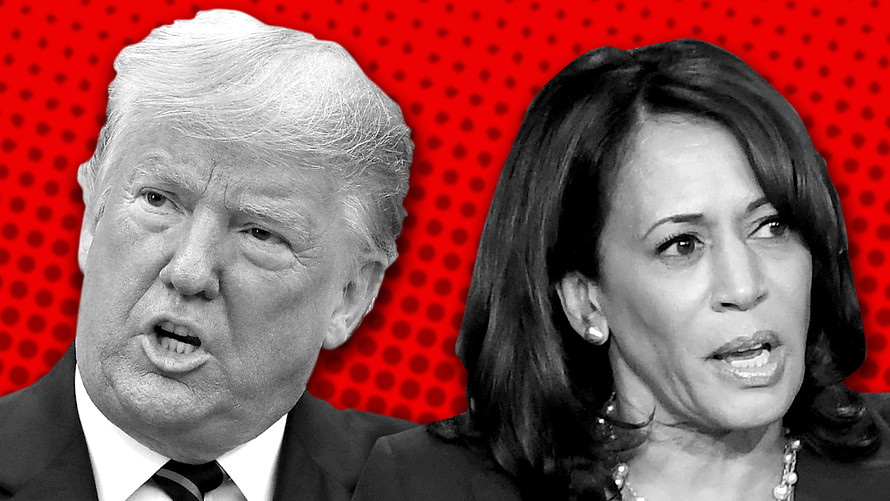 Politicians are talking more sh— than ever.

On Thursday, President Trump lashed out at the “Do Nothing Democrats” that are launching impeachment proceedings against him by tweeting that they are “wasting everyone’s time and energy on BULLSH—.”

Across the aisle, Democratic presidential hopeful Kamala Harris dropped the s-word in her Time magazine cover story this week. “This guy has completely trampled on the rule of law, avoided consequence and accountability under law,” she said of Trump. “For all the sh— people give me for being a prosecutor, I believe there should be accountability and consequence.”

In fact, foul-mouthed lawmakers are on pace to swear more in public this year than they have in recent memory, according to a recent analysis conducted by the Hill .

The news site tasked government-relations software company GovPredict with tallying up how many times politicians used obscene language online since 2014. And obscene words (not including “sh— and “f—”) have hit an all-time high of 1,225 instances on Twitter so far in 2019, compared with 833 in all of 2018. (For what it’s worth, they include the words piss and crap and the c-word, d-word and b-word.) Throw in sh— and f—, and that’s 1,898 cursing incidents on Twitter /zigman2/quotes/203180645/composite TWTR +1.27%  as of late August this year, compared with 2,578 overall for last year. 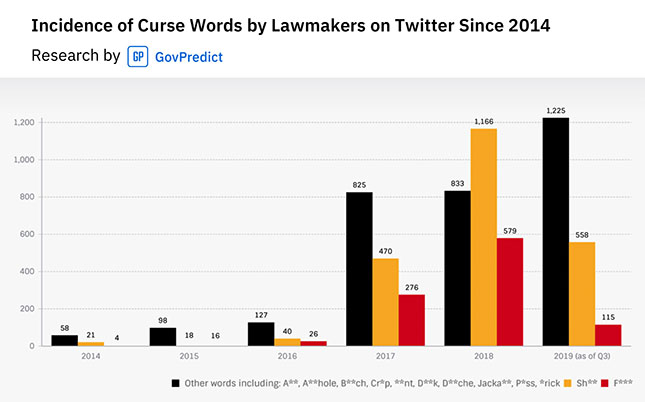 GovPredict CEO Emil Pitkin reportedly told the Hill that the research “shows a stark uptick in the overall usage of curse words by legislators on Twitter.” In fact, overall swearing by politicians on Twitter (again, not counting the s- or f-words) numbered just 127 in 2016, before jumping to 825 (a whopping 549% rise) in 2017, the year Donald Trump was inaugurated as president.

President Trump is no stranger to swearing while stumping. In fact, the New York Times, which has dubbed him the “profanity president,” counted Trump using 10 “hells,” as well as an “ass” and a couple of “bullsh—s” in a single Panama City Beach, Fla., speech in May. (It’s been reported Trump has made even ardent supporters uncomfortable by taking God’s name in vain.)

But he’s not alone. In fact, the examples of lawmakers and presidential candidates using four-letter words are almost too numerous to count.

Beto O’Rourke let the f-word slip, as a fully expressed WTF, while talking to reporters last month. When a reporter asked how Trump should respond to the El Paso, Texas, mass shooting, O’Rourke responded, “He’s been calling Mexican immigrants rapists and criminals. Members of the press, what the f—?” And after the El Paso native heard that the shooter might have had a military-style weapon, O’Rourke said that we need to “keep that sh— on the battlefield. Do not bring it into our communities.”

When Trump blamed videogames in part for the recent gun violence, Sen. Cory Booker wrote in a text shared by his presidential campaign on Twitter: “Listening to the president. Such a bullsh— soup of ineffective words.” (He also said on “Late Night with Seth Meyers” that he sometimes feels like “punching” the “physically weak” president.)

And who could forget when Rep. Rashida Tlaib told a crowd of Trump critics in January that the new Congress was “gonna go in and impeach the motherf—er”?

This isn’t the political kiss of death it once was, however, as public discourse has become coarser (or more relaxed, depending on personal taste) overall. Casual swearing is common practice at many tech, finance, health care and professional-services companies, according to a recent survey. Earlier this year, off-Broadway shows “Hatef**k” and “Actually, We’re F**cked” included the f-word (obscured by asterisks) in their titles, as have network TV shows like “$#*! My Dad Says” on CBS and the Disney-owned /zigman2/quotes/203410047/composite DIS +1.97% ABC’s “Don’t Trust The B—— in Apt. 23.” Even PBS children’s show icon Bill Nye the Science Guy has been using language that’s anything but family-friendly.

Related: How to get ‘filthy f—king rich,’ according to Bill Nye, the Science Guy