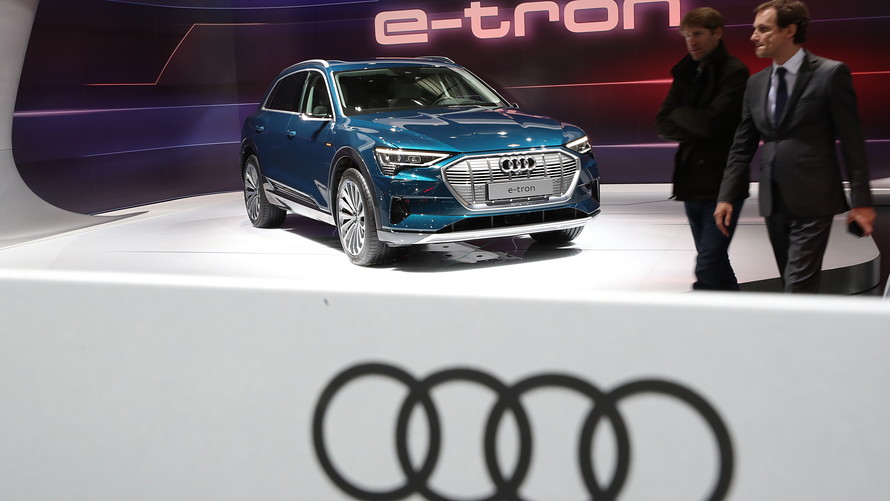 DIRK WAEM/AFP/Getty Images
The Audi e-tron SUV, shown here during the Brussels Motor Show in January, is the priciest product being advertised during the Super Bowl on Sunday.

Watching the Super Bowl — and its famed commercials — is a tradition for many Americans.

But when it comes to actually buying what is advertised, it would cost consumers a pretty penny. In precise terms: $191,803.68.

Marketing and consumer research experts said the hefty price tag for the products and services from this year’s batch of advertisers — largely due to expensive automobiles — is no surprise. “The Super Bowl always reflects the economy,” said Tim Calkins, a consultant and clinic professor of marketing at Northwestern University’s Kellogg School of Management.

To come up with the $191,803.68 figure, MarketWatch referenced the list of national Super Bowl advertisers based on reports from advertising trade publications AdAge and Adweek . For consumer products, such as chips and beer, we referenced prices from a variety of retailers including Walmart /zigman2/quotes/207374728/composite WMT -1.02% , Amazon /zigman2/quotes/210331248/composite AMZN -1.79%  and Total Wine.

Car prices were based on advertised manufacturers’ suggested retail prices. Prices for electronic devices were referenced from their manufacturers. For subscription services, the cost was reflective of a one-year contract or membership.

In cases where a commercial did not advertise a specific product, MarketWatch selected a representative product from that brand. This was also done in instances where the specific ads set to air on Sunday were not pre-released.

Read more: Wait till President Trump finds out where 40% of international Super Bowl ticket buyers are from

Still $191,000 is a drop in the bucket compared to what brands pay for airtime during football’s big game. Last year, a 30-second ad during the Super Bowl cost a record $5.24 million, up 96% from a decade ago, according to a report from market research firm Kantar Media .This year, that number has grown to $5.25 million.

The companies that choose to advertise during the Super Bowl — and the ads themselves — can serve as a strong economic indicator, at least in hindsight.

A decade ago, two ads in particular capitalized on an economy in its worst recession in decades. Famously, Cash4Gold , a company that buys gold, silver and platinum from consumers, ran an ad starring TV host Ed McMahon and rapper MC Hammer during the 2009 Super Bowl marketing its services. It was hailed as the first time a direct-response advertiser had aired a commercial during the annual event.

And E*Trade brought back its famous baby for a commercial that year, in which the talking babies discussed the state of the economy.

Going further back, an ad in 1988 by the former investment bank Shearson Lehman Hutton criticized the use of automated stock buying and blamed Black Monday on program trading.

In other cases, the ads can be harbingers of troubles ahead. A number of dot-com start-ups, including Pets.com, advertised during the 2000 Super Bowl just before the dot-com bubble burst. And Ameriqest Mortgage ran popular commercials during the 2005 game a year before the country’s booming housing market would start to come crashing down.

It remains to be seen which ads in particular will stand out from this year’s Super Bowl as indicative of our economic environment, like 2009’s Cash4Gold ad, but marketing experts saw two predominant trends.

For starters, multiple brands are looking to highlight their efforts toward sustainability. Audi’s Super Bowl ad is introducing the public to its upcoming all-electric line of vehicles . Similarly, Budweiser /zigman2/quotes/209225053/composite BUD -0.76%  will be running an ad featuring its famous Clydesdale horses running past a wind farm.

These spots build on ads in recent years that have portrayed brands as being more environmentally-friendly.

This is a sign that consumers are now more willing to spend more money if that also means they will be helping the environment, said Miro Copic, a marketing lecturer at San Diego State University. “In the past if a consumer was shown that an organic product cost more than the mainstream product, they would revert back to the mainstream product,” he said. “That’s changing somewhat, especially with millennials and Gen-Z, and that’s an important attitudinal shift.”

‘We may see more robots than football players.’

—Tim Calkins, a consultant and clinic professor of marketing at Northwestern University’s Kellogg School of Management.

Additionally, a number of major tech firms invested a substantial sum in Super Bowl ads this year. Amazon is running two ads, including a 90-second spot which likely cost upwards of $15 million to air, promoting its Alexa-enabled products and Amazon Prime video content.

Microsoft /zigman2/quotes/207732364/composite MSFT -1.24%  has a commercial featuring disabled children playing video games on the Xbox using adaptive controllers. Google /zigman2/quotes/202490156/composite GOOGL -2.42%  has reportedly bought airtime for two ads, but has yet to release details on their contents.

Technology is a theme even in ads that aren’t for major tech firms. A Super Bowl commercial for Pringles /zigman2/quotes/209631250/composite K -0.93% , for instance, features a voice assistant in the vein of Amazon’s Alexa or Apple’s Siri /zigman2/quotes/202934861/composite AAPL -3.17%  expressing discontent with its existence.

“We may see more robots than football players” in this year’s batch of ads, Calkins said. “That reflects the growth of AI and the technology shift in our country.”

Advertisers just want to give consumers a break from their everyday pressures.

Consumer confidence has dropped recently amid stock market volatility, trade-related concerns and the government shutdown. That, along with the divisive political climate in the U.S., has given brands license to be funnier in their ads this year after two years where subdued social messaging largely prevailed during football’s big game.

“With the state of the political climate and actual climate, it looks as though advertisers just want to give consumers a break from their everyday pressures,” said Jennifer White Boehm, associate director of financial services and auto reports at market research firm Mintel.

There’s also a sense though, that with the economy potentially heading for more turbulent times in the year ahead, consumers may not be in a buying mood. “You can see why consumers would be hesitant on major purchases,” said Charles R. “Ray” Taylor, a marketing professor at the Villanova University School of Business and senior research fellow at the Center for Marketing and Consumer Insights.

That notion, Taylor argues, helps explain why some car makers, including Chrysler /zigman2/quotes/204248628/composite FCAU -3.46% , Chevrolet /zigman2/quotes/205226835/composite GM -1.32%  and Ford /zigman2/quotes/208911460/composite F -0.69% , have opted against running Super Bowl commercials this year. It also means that the companies that do choose to advertise won’t be looking to boost sales in the near-term. Instead, they’re looking to shore up their brand identity.

“The marketers are focusing on the long term with social responsibility and reputation,” Taylor said.