Gold is losing its glitter — but platinum has performed even worse. All of which is good news for the stock market.

That, at least, is the conclusion of an academic study by Darien Huang, a former finance professor at Cornell University, and Mete Kilic, a professor of finance and business economics at the University of Southern California. They found that the gold-platinum ratio is a good stock market predictor; it’s bearish when the ratio is low, and bullish when — as it is now — at high levels.

In fact, the ratio today is at its highest level in more than 10 years. (See accompanying chart.) 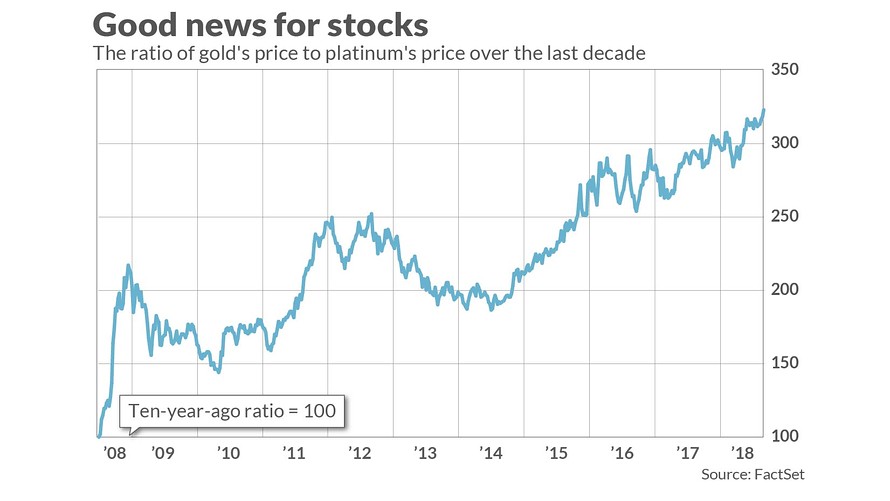 Why is the gold-platinum ratio a good stock market predictor? In a number of interviews in recent years, Huang explained to me that the ratio reflects the different factors that influence the prices of each of these commodities. Platinum  primarily reflects industrial demand, while gold’s  price reflects both industrial demand as well as investor demand for a hedge against economic and geopolitical trouble.

The stock market’s ‘wall of worry’ is stronger now than ever.

In essence, the current message of the gold-platinum ratio is that the stock market would have exhibited even more strength over the last couple of years if it hadn’t been held back by investor concern and anxiety. Put simply, the bull market over the past several years has been climbing a “wall of worry.”

Even more incredibly, the indicator is saying that the stock market’s wall of worry is stronger now than ever.

Read: Here’s how the commodities sector performed in the first half of the year

Also:   Here’s what may be eroding gold’s traditional haven status

The proof of the pudding is in the eating, of course. I devoted columns to this gold-platinum ratio in both August 2016 as well as July 2017, in both cases forecasting that the stock market was headed higher over the subsequent 12 months. Both forecasts proved right, needless to say: The Dow Jones Industrial Average /zigman2/quotes/210598065/realtime DJIA -0.29%  is more than 30% higher today than where it stood two years ago.

These are just two data points, of course. But Huang and Kilic found that, at least since 1975, the gold-platinum ratio has had a significantly better track record than nine other well-known indicators that researchers previously found to have predictive ability — including, prominently, the Cyclically-Adjusted PE Ratio, or CAPE, made famous by Yale University’s Robert Shiller.

To be clear, the gold-platinum ratio is not a short-term indicator. The academic research that discovered the indicator uses it to forecast the stock market’s 12-month direction, so its correlation to equities’ direction over the next month or two is up in the air. Accordingly, even if the ratio’s forecast that the stock market will be higher in 12 months is correct, the market could easily go a lot lower first.

Nevertheless, it’s comforting to know that, in the midst of many other academically approved indicators that are telling extremely bearish stories, at least one is more bullish than ever.