This man wants to upend the world of high-frequency trading

When developers at a top U.S. stock exchange needed help debugging a program that puts time stamps on quotes and trades in July, they could have hired a high-profile consulting firm.

Instead, they called a customer who runs a company out of a small office in a Chicago suburb who had weeks earlier called the exchange’s dealings with high-frequency trading firms “completely illegal” on Twitter.

The customer, Eric Scott Hunsader, and a colleague did the work in a few days — for free.

Hunsader occupies an unusual position in the investing world. Founder of a software company called Nanex , he is a market data expert whose tools for spotting patterns and solving puzzles are indispensable to traders. But he’s also a vocal critic of market structures he believes punish investors, and he frequently assails high-frequency traders, exchanges and government regulators.

Hunsader’s admirers laud his independence and zeal, though sometimes only privately. Investment firm insiders smuggle him data to bolster his arguments. His critics, meanwhile, mainly ignore him publicly, some dismissing him as a conspiracy theorist. He’s both insider and outsider, simultaneously considered an authority and a crank.

“He is able to shed light into a dark game,” said Gibbons Burke, a market watcher who worked with Hunsader at Quote.com in the mid-1990s. “You can measure his success by the caliber of his enemies.”

Hunsader, bespectacled and stocky at 53, grew up in Manatee County, Fla., where he recalls sailing trips along the Gulf Coast. His father was a tomato farmer, his mother a homemaker. Hunsader, second-oldest of four siblings, was a bright teen who breezed through school. “Everything came easily to me,” he said in an interview with MarketWatch.

He began trading stocks after graduating from college. Hunsader determined that he’d need to automate orders to succeed, so he taught himself the programming language C++ . His first trading program, which reversed long and short positions on futures when their moving averages crossed, turned $6,000 into $36,000 in a year.

But Hunsader suspected that his success was as much due to luck as skill, and he eventually quit day trading to write software that made charts and tools for traders. In the years to come, he’d start, sell and work for a number of software companies.

In 1995, convinced that the Internet would upend trading, he quit a corporate job to write a program that displayed real-time stock and futures data online. In 1996, he sold that company to Quote.com, where he launched Livecharts, a real-time data visualization program, and QCharts, a trader workstation for Windows. When Lycos bought Quote.com in 1999, Hunsader cashed out, building the Winnetka, Ill., home where his family lives.

He founded Nanex in 2000. The three-person company compresses data from streams of equity, futures and options trades from the New York Stock Exchange, Nasdaq, BATS Global Markets and the Chicago Mercantile Exchange. Hunsader buys the data from the exchanges, paying for servers that house the data at their sites. The feeds can cost tens of thousands of dollars a month. 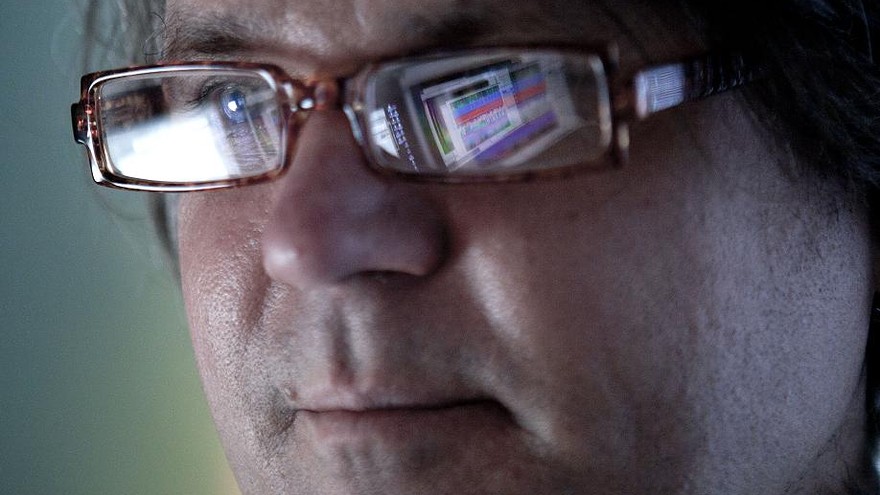 Traders use the data, which include historic and delayed information as well as real-time transactions, to make trading algorithms, while exchanges use it for research.

The Nanex office, which Hunsader shares with four colleagues — a fifth is in Santa Barbara — is on the second floor of a corner building in downtown Winnetka , a North Shore suburb that is among the nation’s most expensive.

Above the quiet two-lane street and its boutiques, brick sidewalks, bookstore and a coffee shop pulse screens displaying fast-scrolling columns of black and white letters and numbers that represent billions of financial transactions made each day by the world’s financial community.

A third room houses servers that hold about 80 terabytes of data. (A busy trading day produces about 1 terabyte, which would fill a new top-of-the-line MacBook Pro .) Nanex stores about 4,600 days of data, going back to 2003. “We are always buying more servers,” said Hunsader.

Hunsader works about 12 hours a day, often reaching the office before dawn. He holds evenings for family: He ended one telephone interview promptly at 5 p.m. to make sure a daughter made it to a community theater performance on time.

The rest of the day is mostly spent writing and testing software, checking email — and tweeting.

Over the past 15 years, meanwhile, the global financial market has fragmented: Where there were once three main U.S. exchanges, there are now more than 40 exchanges and alternative trading systems.

And high-frequency trading companies have largely replaced traditional broker-dealers, using algorithms instead of human traders to make decisions in milliseconds, mostly in response to orders made by other algorithms.

Technology has made trading faster and more efficient. But the system is also more opaque, and some wonder whether high-frequency trading companies are profiting at the expense of institutional and retail investors.

“There are probably about 5,000 people who know how the trading system works but none of them will speak about the way these high-frequency firms make money,” said a financial industry insider, who spoke on the condition they not be named because their employer had not authorized them to discuss the matter publicly.

On May 6, 2010, the Dow Jones Industrial Average plummeted nearly 1,000 points, then its biggest intraday point drop ever. A government investigation blamed a big order that triggered a selloff for the “Flash Crash,” but couldn’t identify the structural problem that led to markets plunging 10% in 20 minutes before rising again.

Hunsader’s research, published that June, suggested that high-frequency trading companies responded to the first big order by flooding the market with orders that were withdrawn before they were filled, overwhelming the central feed of pricing information other investors needed to complete trades.

The practice, Hunsader says, created illusory liquidity that led to the “Flash Crash” and other dramatic market events that followed. (He coined the term “quote stuffing” to describe it.) “It was a bit like a denial-of-service attack on a website,” said Hunsader. “The system can’t handle it and crashes.”

Hunsader, sure he’d identified a core structural issue, later published more than 2,000 more reports — some a few sentences, others more detailed explanations of how he says markets are manipulated.

“I peeked behind the curtains and did not like what I saw,” said Hunsader.