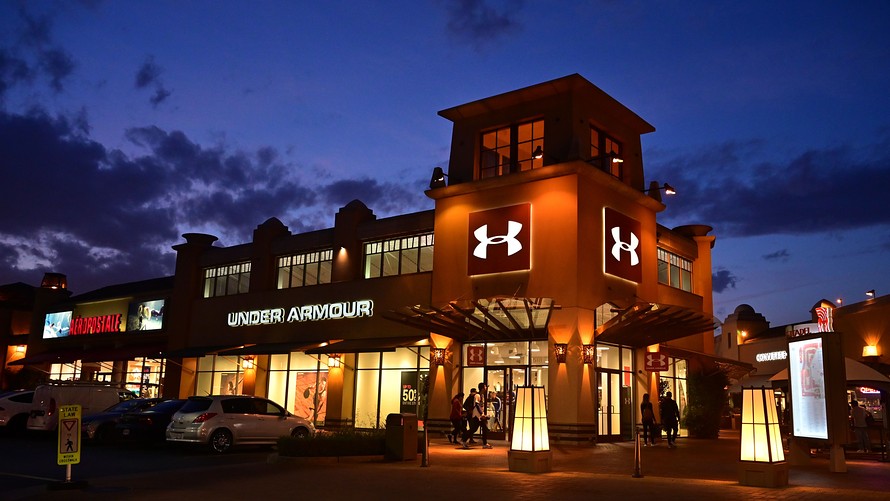 AFP via Getty Images
Does this shopping center pay enough in property taxes to cover the cost of building, maintaining and eventually replacing roads and sewer lines?

For a community, rapid growth is easy. Bolstered by state and federal funding, municipal bond debt financing as well as tax incentives and deferrals, cities and towns that want to induce new development have many means of doing so. With each transaction, they receive immediate fees and tax revenue, but also take on the long-term responsibility to provide ongoing service, maintenance, and—in the case of infrastructure—replacement.

And while that new big box store, strip mall, or drive-thru restaurant may last only a couple of decades, the maintenance obligations from all that asphalt and those new sewer lines are eternal. Too often, though, we haven’t ever bothered to quantify those obligations. When you begin to do the math on our development pattern, what you find is alarming.

Most cities and towns in North America are functionally insolvent. This is not hyperbole. It comes down to a simple question: Is new development producing enough wealth to fund the long-term maintenance of its own infrastructure—let alone public safety and all the other services that we expect government to provide? When we examine these costs and revenue streams, we often find the answer is no.

This is true in Lafayette, La., where simply maintaining everything—the streets, pipes, pumps, drainage systems, and so on—that has already been built would require a staggering 513% increase in local taxes. This is true in central Minnesota, where I calculated it would take 79 years for the taxes paid by the homes on one cul-de-sac to pay off the cul-de-sac’s construction costs.

The problem is invisible until it isn’t anymore. We can choose not to see it as long as our infrastructure is new enough to not yet need replacement, or as long as new growth allows us to cover the costs of the previous iteration of growth in what amounts to a giant Ponzi scheme. To truly assess our cities’ and towns’ solvency, we must start asking the question: not “are we growing?” but “are we experiencing productive growth?”

A metric of success that planners and other local officials can use to ask this question is value per acre. This is a measurement of the productivity of a land-use pattern, much in the same way that yield per acre is the measure of the productivity of a farm field. How much wealth is created on each acre of developed land? It’s simple to compute and powerfully correlated with success. Yet few cities consistently incorporate this metric into their land-use analysis.

When modern cities are analyzed by this measure, pre-Depression neighborhoods —even those that are far from affluent—financially outperform even the newest stuff being built today. Collections of blighted homes and underperforming commercial stock are routinely found to provide a greater return on the public’s investment than anything built in the past couple of decades. Acre by acre, they produce more concentrated wealth and consume less public infrastructure and services. It might shock most people to learn that in many American cities, the poorest neighborhoods subsidize the wealthiest.

The explanation has much to do with the pattern of development we adopted in the mid-20th century. We began to build in a manner oriented toward cars, not people on foot. All the acres needed for traffic flow, buffering, and parking are wasted, non-performing space. They cost us a lot of money, yet yield a pitifully low ROI.

This is never clearer than when we look at the apex species of the car-centric development pattern: the big-box retail store. Many cities are eager to land one of these. Yet when we examine their financial productivity in value-per-acre terms, we see that these stores—generally cheaply built, one-story buildings with a parking lot that dwarfs the store itself—produce a tiny fraction of the concentrated value of traditional, mixed-use downtown development. These numbers from Asheville, N.C., make the contrast clear. One for is a typical Walmart store near the edge of town; the other is for a six-story mixed-use building once was home to a J.C. Penney store that is in the heart of downtown. 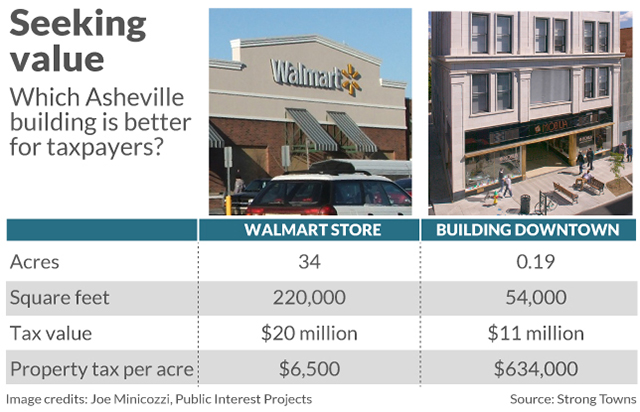 This lack of productive use of our finite supply of land is at the core of why modern American communities struggle financially, why they’re falling apart despite enormous investment and decades of growth. The returns on most public investments are negative, and those negative returns compound relentlessly over time.

The automobile-centric development pattern not only yields less value per acre; it also lacks long-term adaptability and so is, in effect, designed to decline. The downtown building in Asheville may, over its life, serve as various combinations of homes, offices, and/or local retail space. Today’s big box stores, strip malls, and franchise restaurants lack this potential for fluid reuse; they are one-life-cycle buildings, the municipal equivalent of slash-and-burn agriculture. Walmart builds its stores for a 12-to-15-year lifespan. The vacant shopping malls and big-box shells that dot the landscape of an older generation of American suburbs attest to the fallout of pursuing growth without long-term resilience. 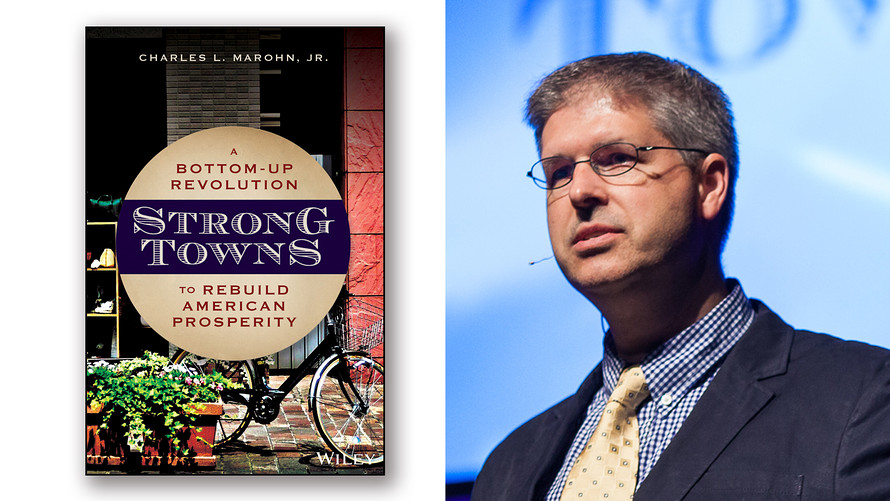 We need to stop pouring our money into aggressive growth schemes and start focusing on producing more value out of the places we have already built. Making low-risk “small bets” in depressed neighborhoods—putting in street trees or patching sidewalks—yields consistently healthy returns. An ounce of routine maintenance is worth a pound of revitalization.

Of course, to afford to maintain the infrastructure we have built, we must also allow our existing neighborhoods to “thicken up” in intensity and productivity to achieve a healthier ratio of wealth produced to services demanded.

The next increment of development should be available everywhere with few obstacles. Where today there is a block of single-family homes, it should be legal and easy to add a backyard cottage or do a duplex conversion. Redeveloping surface parking lots, allowing entrepreneurs to start with a pop-up stand or food truck and graduate to a brick-and-mortar building, encouraging a wave of incremental developers and rehabbers—these are the forms of growth that our leaders must now pursue, not large-scale development requiring costly subsidy.

The greatest obstacle to this change is, of course, us. Americans are said to prefer their suburban homes and their big box stores—and this is true, albeit in the same way they prefer other subsidized options. If we had to pay the full cost of an Uber ride or the delivery of an Amazon package—if our system didn’t distort and subsidize these alternatives in a variety of ways—our preferences would change.

While we all understand that Uber must someday run a profit and Amazon can’t continue to sell and deliver products at a loss indefinitely, we don’t hold our cities to the same constraints. We must, if we want to be able to rely in the future on the same level of services we expect from our local governments today.

America needs to step off the kinetic growth treadmill and embrace an approach that truly builds wealth and serves our citizens. We need to shift to a bottom-up approach for building our cities, one freed from the pressures of national growth targets. Our cities need to, once again, become strong towns.

Charles L. “Chuck” Marohn, Jr., is the founder and president of Strong Towns and the author of “Strong Towns: A Bottom-Up Revolution to Rebuild American Prosperity.” Follow him on Twitter @clmarohn.

Now read: The hottest housing markets of 2020 are far from the coasts