This year’s finalists for the National Toy Hall of Fame include ... the iPhone? 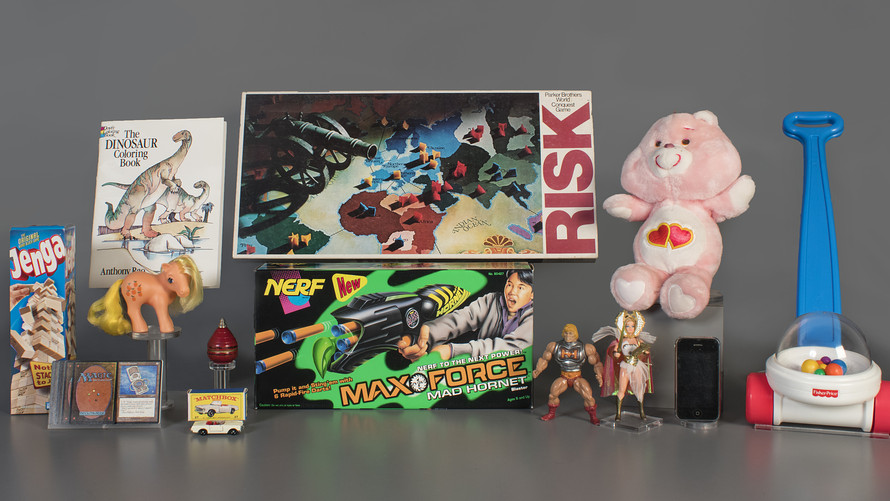 When you think of the most iconic toys that have changed how people have played and interacted for generations, you probably picture coloring books, spinning tops … and smartphones?

Hasbro /zigman2/quotes/201249319/composite HAS +3.82%   dominates the finalists, with its playthings such as Jenga blocks, Magic: The Gathering cards, My Little Pony dolls, the Nerf Blaster and the Risk board game making the preliminary cut. Mattel’s /zigman2/quotes/209819189/composite MAT +0.88% Fisher-Price Corn Popper, Masters of the Universe action figures and Matchbox cars are also among the contenders. And American Greetings’ Care Bears, as well as the coloring books and tops mentioned above, round out the rest of the play pack.

The smartphone made the otherwise low-tech list because it’s become a platform for countless wildly popular mobile games like Fortnite (made by Tencent Holdings Ltd. /zigman2/quotes/207908563/composite TCEHY -0.14% ) and Pokémon Go, as well as playful interactions that have become a staple of generation text, such as sending GIFs, or altering photos with cartoonish filters on Snapchat /zigman2/quotes/205087158/composite SNAP +0.97% . Indeed, almost half (45%) of kids older than six have access to their own mobile device, Common Sense Media reports. The group, which studies the impact of technology and media on families, also found that 29% of kids (more than one in four) say they sleep with their device in bed with them. (Move over, teddy bears.)

Of course, many child development experts caution against giving kids too much screentime, as there are concerns about its impact on social and cognitive development, not to mention the havoc it can wreak on sleep habits and mental health (especially for those kids obsessed with social media sites like Facebook and Instagram /zigman2/quotes/205064656/composite FB +1.94% .)

Related: Madonna is right about smartphones being bad for children: They have disturbing, long-term effects on their brains

Shane Rhinewald, spokesman for the Museum of Play, which curates the National Toy Hall of Fame, told MarketWatch that the smartphone “has revolutionized the way that people connect and play. Not only is it a gaming platform for an almost endless amount of mobile games, but also it’s used playfully to send emojis and GIFs or to create silly videos and alter snapshots. While it doesn’t have the history of some of the other toys, it hits it out of the park for innovation.”

Related: Does the new ‘Ms. Monopoly’ fix or fuel the gender pay gap?

He also noted that kids aren’t the only ones who play with toys — and adults are also turning to their devices to decompress with games and apps. “The smartphone profoundly changed the world of play, and it opens up an interesting conversation about the role of technology and tools in the way that people play, too,” he said.

The public can vote for their favorites through Sept. 18 at toyhalloffame.org . The three toys scoring the most public votes will then join the top-three submissions by members of the hall of fame’s National Selection Advisory Committee. (The public vote will collectively act as one member of the 23-member committee.) The winners will be revealed on Nov. 7.

Related: Fortnite, ‘Frozen’ and llamas among the toy trends for 2019

So which pieces of childhood nostalgia should be immortalized for all time? Read up on the cases for each childhood classic below.

Care Bears: Cheer Bear, Funshine, Tenderheart and friends were first drawn in 1981 as a line of American Greetings Corp. characters, but expanded into the plush and plastic teddy bear lines that became staples in childhood bedrooms and on TV shows and movies over the next decade. Now a new generation has been introduced to the “Care Bear Stare” via a 2015 Netflix /zigman2/quotes/202353025/composite NFLX +0.58%   reboot.

The coloring book : While there are examples of people coloring in illustrations in instruction books in the 1800s, the 1880 “Little Folks Painting Book” became the first popular coloring book . People of all ages have been coloring in and outside the lines ever since. And adult coloring books made a resurgence in the 2000s, with a couple cracking Amazon’s best-selling books list for the first time in 2015.

Fisher-Price Corn Popper: This classic push-toy has been entertaining toddlers (and encouraging them to hone their motor skills) with its dome of popping balls since 1957.

Jenga: Englishwoman Leslie Scott developed this wooden block game, where players stack them up and then try to remove pieces without toppling the tower, based on her childhood growing up in Africa. Jenga — which is Swahili for “to build” — was launched in 1983. It sold more than 80 million copies world-wide by 2017.

Magic: The Gathering: The fantasy-themed collectible card game was released by Wizards of the Coast in 1993 before eventually being snapped up by Hasbro. And 26 years later, the game hasn’t lost its magic: Hasbro noting in its Q2 report that much of its 9% revenue growth YOY was led by M:TG in its physical and digital formats.

Masters of the Universe: By the power of Grayskull, sword-wielding twins He-Man and She-Ra have been going strong since he was featured in a cartoon series in 1983, and she came swinging in 1985. After spawning action figures, T-shirts, toothbrushes, sleeping bags and other merch in the 80s, there’s now a She-Ra reboot on Netflix, and Kevin Smith is working on a new version of He-Man.

Matchbox cars: The tiny toy cars rolled out in 1952— and by 1960, they were selling at a rate of more than 100 million a year in the U.S. Hot Wheels, its biggest competitor, parked itself in the National Toy Hall of Fame in 2011. Will this be the year that Matchbox catches up?

My Little Pony: From the roly-poly ponies like Blossom introduced in 1982, to the long-legged Bratz-style phillies starring in the 2010 “Friendship is Magic” reboot series, these haute horses have galloped into children’s hearts for generations. The National Toy Hall of Fame says the pastel ponies were so popular during their 1980s peak, in fact, that they outsold Barbie for several years.

Nerf Blaster: In the 1990s, it was Nerf or nothin’. And kids were wild about pelting each other with the soft, foam darts, missiles and disks when the blaster was released in 1989. Today, naturally, there’s Fortnite-themed Nerf guns.

Risk: The strategy board game of global domination was first introduced in France as “La Conquête du Monde” in 1957 before crossing the pond as “Risk” in 1959. It’s now available on the Nintendo Switch /zigman2/quotes/201616881/composite NTDOY +1.47%  as well.

Tops: People of all ages have been amusing themselves by spinning tops for thousands of years , including a wooden top carved circa 1300 B.C. found in the tomb of King Tut, and a clay top that archaeologists dug up in Iraq that’s been dated to 35th century B.C. Indigenous tribes across the globe also fashioned tops from fruit, nuts and seeds.

And … Smartphones : IBM launched the Simon Personal Computer, which is considered to be the first smartphone , in 1994. But Apple changed the game when it launched the iPhone in 2007, helping to fuel the $355 billion global smartphone market , with some 6 billion smartphones expected to be in circulation by 2020. And playing games are indeed among their many other functions.