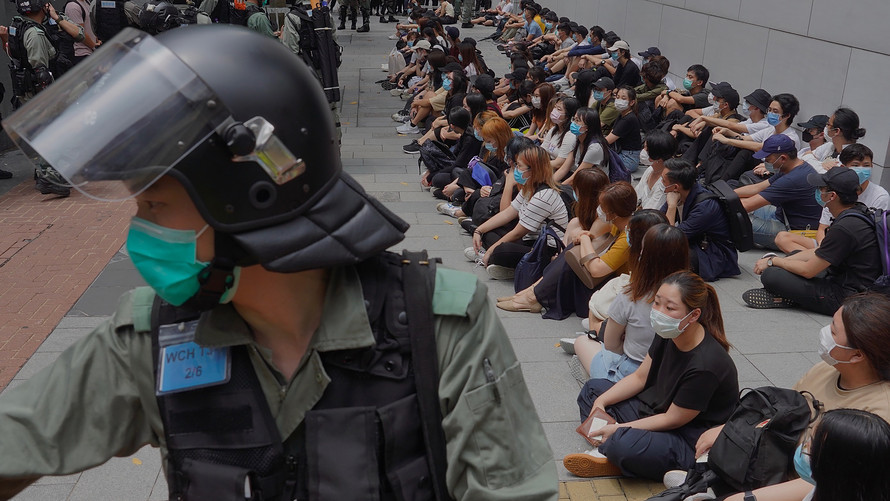 Police massed outside the legislative building and raised flags warning protesters to disperse. In the Central business district, they shot pepper balls at protesters and searched several people.

In the Central business district, police shot pepper balls at protesters and searched several people. More than 50 people in the Causeway Bay shopping district were rounded up and made to sit outside a shopping mall, while riot police patrolled and warned journalists to stop filming while brandishing pepper spray.

At least 16 people, most of them teenagers, were arrested on charges of possessing items fit for unlawful purposes, such as petrol bombs and screwdrivers. Three of the people arrested were charged for dangerous driving.

Lawmakers were to debate a bill that would make it illegal to insult or abuse the “March of the Volunteers” in the semi-autonomous Chinese city. Those found guilty could face up to three years in prison and a maximum fine of HK$50,000 (US$6,450).

The bill was proposed in January 2019 after Hong Kong spectators jeered at the anthem during high-profile, international soccer matches in 2015. Last year, FIFA fined the Hong Kong Football Association after fans booed the Chinese national anthem at a World Cup qualifying game.

Hong Kong was returned to China from British colonial rule in 1997 under a “one country, two systems” framework that promised freedoms not found on the mainland. Anti-China sentiment has risen as residents see Beijing moving to erode those rights.

Mass protests in 2014, known as the Umbrella Revolution, followed the Chinese government’s decision to allow direct election of the city leader only after it screened candidates. In the end, the plan for direct elections was dropped.

Legislation proposed in Hong Kong last year that would have allowed Hong Kong residents to be sent to mainland China for trials set off months of demonstrations that at times involved clashes between protesters and police. The legislation was withdrawn.

China’s ceremonial parliament now meeting in Beijing has moved to enact a national security law for Hong Kong, aimed at forbidding secessionist and subversive activity, as well as foreign interference and terrorism. Hong Kong’s own government has been unable to pass such legislation due to the opposition in the city, but Beijing advanced the law itself after the protests last year.

Opponents of the anthem bill say it is a blow to freedom of expression in the city, while Beijing officials previously said that the law would foster a patriotic spirit and the country’s socialist core values.