Three stages of a bull market

Our post last week was titled "A bullish stock in a bullish market," and our pick was long Amazon.com (NAS:AMZN) . That stock, which many have given up for dead, gained $10 for the week, fulfilling our short-term profit objective but not yet the long-term target. We thank readers who posted friendly comments about our analysis.

As we wrote last week, in our research we always go from the general to the specific, from major trends to the intermediate ones. Today we'd like to step back a bit and review a very long-term picture, which will help us in our short-term decision-making. 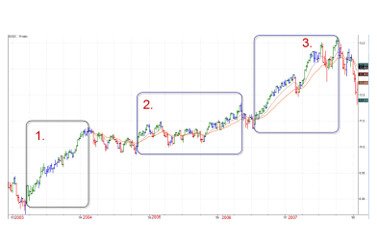 For over a century, a typical, multi-year bull market in the U.S. consisted of three stages. The first stage is the recovery from crazy bear market lows. The second stage is a steady improvement, in gear with a general improvement in the economy. The third stage is the speculative one, when newcomers pour into the market and buy because "everything is going up."

You can see these three stages outlined above on this plot of the 2004 - 2007 bull market. 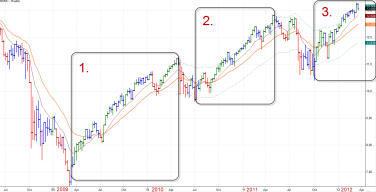 Looking at the current bull market, we can see that it began in March 2009. That's where the crazy bear market values existed, such as GE (NYS:GE)  for under $6 and Citigroup (NYS:C)  for a buck. The first stage lasted for a year and was followed, after a correction, by the second stage, and then another correction. This chart makes it pretty clear that we're currently in the third stage of the bull market.

A third stage tends to last longer than most expect and reach higher than most people anticipate. It is the stage of speculative excess -- we see very few of these, which makes us think that the third stage has quite a bit of life left in it.

No market move goes up in a straight line -- and there'll be minor corrections -- but the main idea is not to miss a speculative rise. 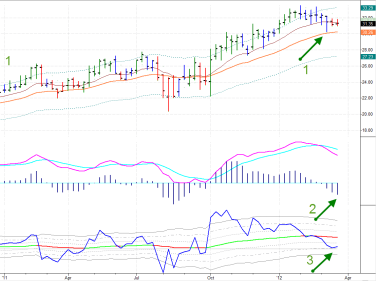 Turning to specific stocks, we look for our candidates among the picks by Spikers, the elite members of the club we run. We trade such picks almost every week in our own accounts. The one that appeals to us today is LKQ Corporation , an auto-parts company in Illinois. Its weekly chart shows a pullback in a steady uptrend.

Notice how prices stabbed lower three weeks ago but rejected those lows for the past two weeks (1). Weekly MACD-Histogram has declined to a level where bottoms tend to occur (2). Weekly Force Index has already turned up (3).

On the bearish side of the ledger, we like Research in Motion (chart not shown). The company is rapidly sinking. Just look around - how many users are switching to iPhones and Androids and how many to Blackberries? This massive shift away from Blackberries is relentlessly hammering RIMM.

Trade well and remember to use proper risk control and trade-sizing. Visit Spiketrade.com

Both Alexander Elder and Kerry Lovvorn are considering a long position in shares of LKQX.