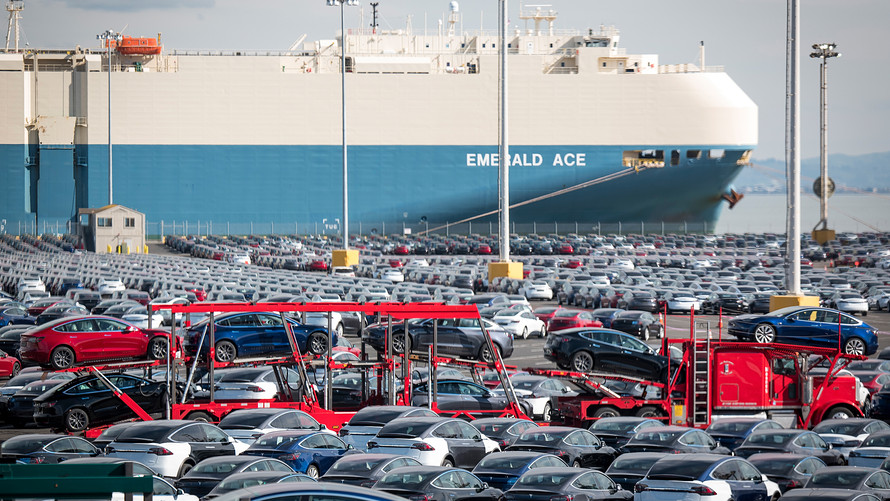 Does a trade war threaten to plunge stocks into a bear market? Conventional wisdom thinks so. Consider that a tweet from President Donald Trump about tariffs can send the market spinning or soaring.

In fact, of course, the matter is far more complex than what Trump tweetsFor example, the S&P Global Sales Report, which was released in early August, shows that the share of S&P 500 /zigman2/quotes/210599714/realtime SPX +0.48%  sales from outside of the U.S. has declined for at least a decade — sliding by five percentage points since 2008, as the chart below indicates. Yet over this same 10 years the S&P 500 turned in one of its strongest performance ever —13.3% annualized, assuming reinvested dividends. 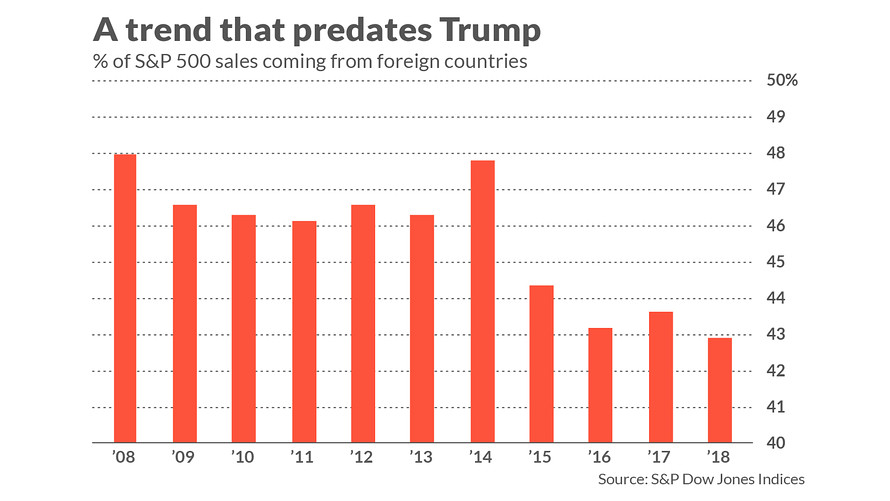 Furthermore, trade protectionism wasn’t even on the general public’s radar until Trump took office. So what’s going on with S&P 500 foreign sales?

In an email, Howard Silverblatt, senior index analyst at S&P Dow Jones Indexes, attributed this decade-long sales decline to the faster pace of economic growth in the U.S. compared to the rest of the world. As a result, S&P 500 companies increased their sales within the U.S. faster than in foreign countries, and consequently, foreign sales dropped as a percentage of the total.

The conclusion: A declining foreign share of total sales doesn’t automatically spell doom, so long as the domestic economy is growing fast enough to make up for it.

Another clue this is not a straightforward matter is that the popular narrative linking U.S. protectionism to the Great Depression is misleading. According to that narrative, the infamous Smoot-Hawley Tariff Act, by imposing steep tariffs on imported goods, was responsible for the 1929 stock market crash and the decade of economic depression that followed.

In fact, however, Smoot-Hawley didn’t even become law until June 1930, and the ensuing trade war didn’t escalate until the U.S. economy was already well into its depression. Another problem with this: foreign trade at the time represented less than 10% of the U.S. economy, and a contraction of that trade would have been unable by itself to be so devastating.

The big contributors to the Great Depression, depending on which economic historian you consult, included an over-leveraged U.S. stock market and overproduction in the economy, coupled with a counterproductive response by the Federal Reserve when the economy began to stumble.

In fact, Smoot-Hawley can be seen as a response to a slowing economy rather than the cause. That’s because, according to researchers, there is little motivation to protect domestic companies from foreign competition so long as the domestic economy is growing. It’s only when the economy starts to weaken that protectionism rears its ugly head. Indeed, one group of economists have devised a formal model that, based on the extent of economic weakness, predicts the extent of tariff protections a country will impose.

Notice what this means: to blame protectionism for economic weakness is to confuse cause with effect. This is not a defense of protectionism, I hasten to add. Most economists (though not all) believe that tariffs do not have their intended effect — and often make things worse.

This discussion sheds some light on the U.S. economy today. Economic growth is slowing and, sure enough, that weakness has provoked an increasingly aggressive protectionist response.

The bottom line? The 800-pound gorilla in the room is, and always is, the growth rate of the U.S. economy. This should be an investor’s primary focus. As politicians constantly remind us: It’s the economy, stupid!

Mark Hulbert is a regular contributor to MarketWatch. His Hulbert Ratings tracks investment newsletters that pay a flat fee to be audited. Hulbert can be reached at mark@hulbertratings.com

Read: The new technology that could turn small businesses into international companies

More: This overlooked ‘black swan’ poses a ‘monstrous’ risk to the stock market