It may have started out like a year-end hedge, as Trade Alert’s Henry Schwartz described it, but a day later and it’s already delivered a tidy profit.

An unidentified investor early Monday paid some $49 million to buy 23,000 January put options at the 2,980 level on the S&P 500 /zigman2/quotes/210599714/realtime SPX +0.64%  , Schwartz told MarketWatch on Wednesday. Put options like these are typically used as protection against declines, as they give the right to sell the value of an underlying index at a fixed level in the future.

That’s likely the case here, with Schwartz explaining that the bearish bet was probably used to protect about $5 billion in assets against a pullback. 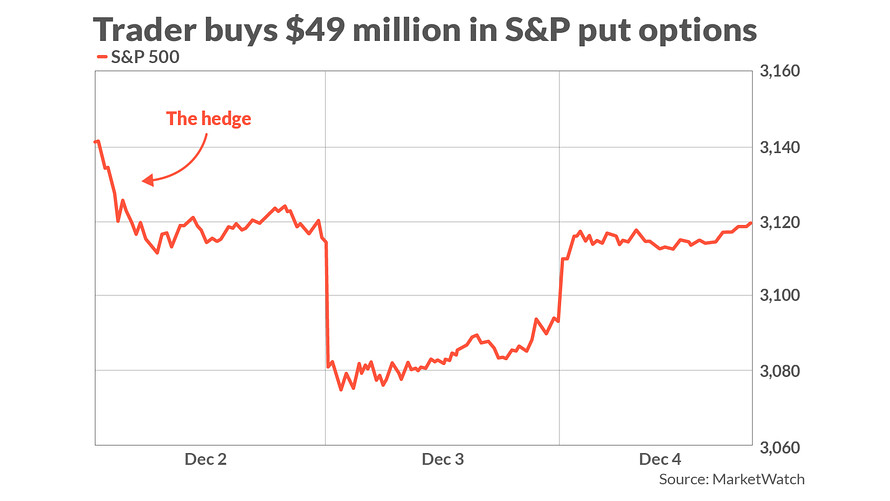 But the timing couldn’t have been better. Stocks on Tuesday saw their biggest one-day fall since early October after manufacturing data showed a continued contraction in November and fresh trade jitters put investors on the defensive. The S&P closed down at 3,093, and the trader unloaded a chunk of his bet to earn a profit of $13 million, while still holding an unrealized profit on 15,000 puts.

The decision to sell a portion of his position also proved timely, with the S&P on Wednesday climbing back toward where the initial bet was established following a report of progress on the U.S.-China trade front.

At last check, the S&P was trading slightly higher Thursday at 3,116

Last month, Bridgewater, the world’s largest hedge fund, reportedly made a similar trade, but on a much larger scale. The fund supposedly scooped up $1.5 billion in puts, though founder Ray Dalio took issue with how the Wall Street Journal characterized the trade as a betting big on a market drop.

“I want to make clear that we don’t have any such net bet that the stock market will fall,” said Dalio, whose macro fund has lost 2.7% through October