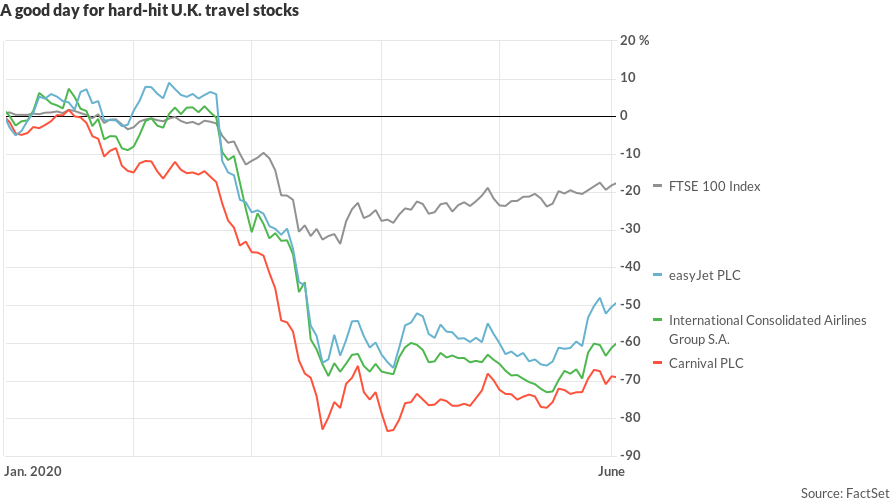 Travel stocks surged in London trading on Tuesday, as investors resumed the so-called ‘dash for trash’ as global markets rebounded.

Markets reacted to the Federal Reserve’s announcement it was going to buy corporate bonds directly and not just through exchange-traded funds.

A report that the Trump administration was preparing a nearly $1 trillion infrastructure package also gave a boost to markets.

The gains came even as data showed the U.K. claimant count rose by 528,900 in May to 2.8 million. “When, as now, economic and corporate data is so dire, then it is up to central banks to step in to bridge the gap in economic activity. Equity rallies are a side effect, and not the chief object, of these central bank moves, but the mantra ‘do not fight the Fed’ is still as powerful as it ever was,” said Chris Beauchamp, chief market analyst at IG.

U.S. retail sales jumped nearly 18% in May, according to data released Tuesday, though they are still lower than February’s levels.

Ashtead Group /zigman2/quotes/200232063/delayed UK:AHT +1.91%  shares jumped 9% as the U.K.-based industrial-equipment rental provider maintained its dividend and said that, since April 10, its U.S. fleet on rent stabilized and then increased. It said there were similar trends in the U.K. and Canada.

“While recent performance has been mixed, the firm will be key beneficiary of a sustained recovery in activity in the U.S., although a rise in virus cases will certainly provide a cause for concern in the near term,” added Beauchamp.