The SG Trend Index is down 6.3% since last Tuesday

A jump in Treasury yields this month appears to be causing pain for trend-following traders who had previously benefited from this year’s bond-market rally.

Commodity trading advisors and other players that bet and surf on the continuation of price trends have taken full advantage of the bond-market’s rally year-to-date, even as more skeptical analysts maintained that the plunge in Treasury yields was unsustainable given the U.S. economy’s steady but slowing growth. Yields and debt prices move in opposite directions.

But the chart below indicates the recent surge in government bond yields has hurt these computer-driven investors who had piled into long positions on Treasury and European government bond futures. 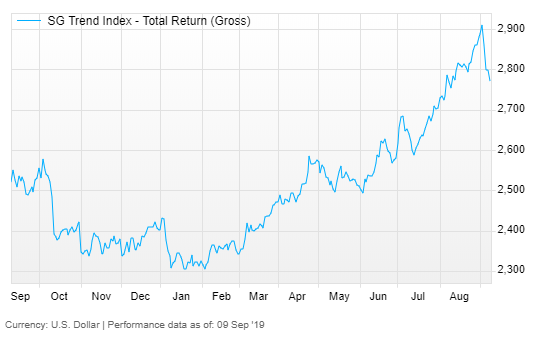 The chart shows the SG Trend Index, which is down 6.3% since last Tuesday, still leaving it up more than 13% year-to-date. The index tracks the performance of commodity trading advisors that employ trend-following techniques.

Still, yields for both maturities have fallen substantially from the beginning of the year.

The move comes amid a heavy rotation in the stock market this week that has seen momentum-oriented shares fall sharply as investors piled into previously left behind value shares.

See : This bond-market strategy returned more than 30% this year in a sea of negative yields

Some analysts warned earlier this year that momentum traders had a habit of getting ahead of themselves, especially in the bond market where managed futures funds have generally leaned towards riding the secular bond-market rally over the last three decades.

Thirty years of ascending bond prices have made trend-following traders more inclined towards placing long positions on Treasury futures, rather than shorting them.

“Systematic strategies have a more difficult time making money on shorting anything with a positive risk premium, or something that goes up on average, as market timing in general is quite difficult,” said Jon Caplis, CEO of PivotalPath, and a former trader at a managed futures hedge fund, in e-mailed comments.

Nikolaos Panigirtzoglou of JPMorgan, in a July note, appeared to anticipate the selloff, envisioning a scenario where commodity trading advisors and other hedge funds sensitive to so-called value-at-risk metrics, or VaR, could be forced to roll back their bullish positions on long-term Treasury and European government bond futures.

When markets start to get choppy, commodity trading advisors can be forced to unwind their long apositions on government bonds, triggering a feedback loop of further selling among other VaR-sensitive traders. The overall effect is a sharp climb in bond yields that may lack an obvious driver, such as a change in economic conditions or shifting expectations for central bank policy.