Trump claims the stock market would be higher if he hadn’t confronted China — is he right?

If the trade war is successfully resolved, the Dow could rise to 30,000 points 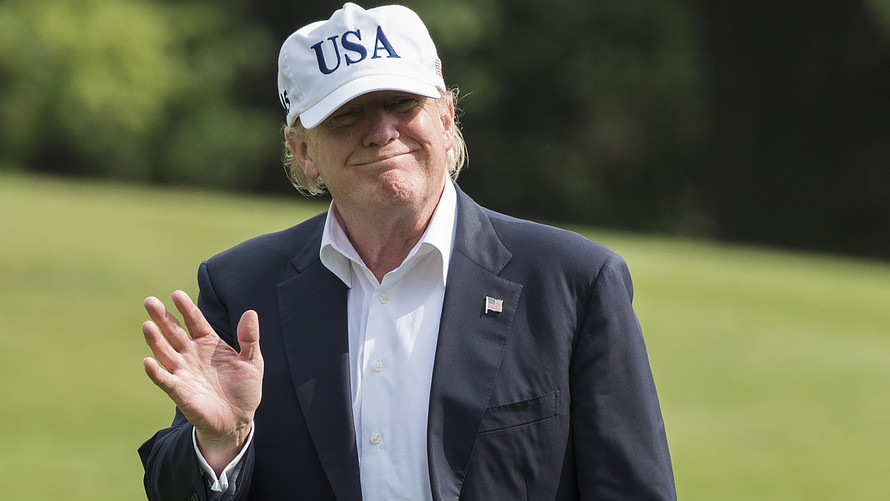 First and foremost, I am politically agnostic. My sole job is to help investors. This column is neither for nor against President Trump.

The Dow Jones Industrial Average (DOW:DJIA) would have been 10,000 points higher if President Trump had not done the “right” thing. Obama, Bush and Clinton should have done it, but they did not do it. What’s the right thing? To stand up to China. Before you send me hate mail, please understand that those are not my words. I am paraphrasing what Trump said .

Is Trump right? The answer to this question helps investors understand what may happen to the stock market if the trade war with China is resolved. Let’s examine with the help of a chart.

• The chart shows a trendline starting from the Arora buy signal. As Trump won the election, most sources were predicting a big stock market drop; at that time, The Arora Report gave a buy signal. The signal was not an endorsement of Trump but simply based on our proven algorithms.

• Take a look on the right side of the chart as to where the trendline is now. The trendline shows that if the trend would have continued, the Dow Jones Industrial Average would have been at 31,000 points right now. This would have made Trump half-right.

• The chart shows the start of a parabolic phase in the stock market.

• The parabolic phase would have likely continued if it were not for certain policies adopted by Trump.

• The chart shows failure of the parabolic phase.

• Based on my 30-plus years in the markets, I can confidently say that more likely than not, another parabolic phase may have started in the stock market if it was not for the trade war with China. After all, this market is controlled by the momo (momentum) crowd.

• A successful parabolic phase would have carried the market higher by 7,000 to 10,000 Dow points. This would have made Trump 100% right.

• The biggest Chinese ecommerce stock, Alibaba (NYS:BABA) , would have likely been at $250 now if there was no trade war.

By now you may be thinking that technicals are supporting Trump, but what about the fundamentals? When the Dow Jones Industrial Average was at 16,000, I was laying out a scenario for Dow 30,000. I have repeated that call several times. As an example, please see “Here’s the case for Dow 30,000 in Trump’s first term.”

Here is a quote from one of my prior writings: “The biggest single factor in the long-term direction of stocks is earnings growth. The current consensus for S&P 500 Index’s operating earnings are $133 per share. According to the Arora Report’s analysis of Trump’s proposals, tax cuts could add about $13 to S&P 500 earnings. Deregulation could add another $7. If gross domestic product growth were to accelerate to 4%, S&P 500 earnings could reach as high as $190 by the end of Trump’s first term. Given the potential growth in the economy, in spite of the Federal Reserve’s plan to raise interest rates, the price-to-earnings (P/E) ratio may stay in the range of 18 to 21. A P/E of 20 applied to $190 in earnings leads to 3,800 in S&P 500. (The benchmark index is now at around 2,351.) For the Dow Jones Industrial Average, that translates to reaching over 33,450 by the end of 2021, Trump’s first term.”

Investors ought to note that the U.S. economy is about 70% consumer-based. The U.S. consumer remains strong, as evidenced by better-than-expected earnings from Walmart (NYS:WMT) , Home Depot (NYS:HD) , Lowe’s (NYS:LOW) and Target (NYS:TGT) .

Start with Arora’s Third Law of Investing and Trading: Making investing and trading decisions based on probabilities is the only realistic and profitable approach.

If the trade war is not resolved and a Democrat other than Biden such as Warren or Sanders starts leading in the polls, the probability is better than 50% of a several thousand point drop in the Dow.

The situation is further complicated by the shenanigans of the central banks and trends toward negative interest rates. I have previously written “The U.S. stock market is like a drunken party — stay for a while but know when to leave.” This is the reason that investors should follow a proven adaptive model with a successful track record in both bull and bear stock markets. An example of such a model is ZYX Asset Allocation Model. In plain English, adaptive means a model that automatically changes with market conditions. Under present market conditions, static models that have previously worked may not work now because market conditions have changed.