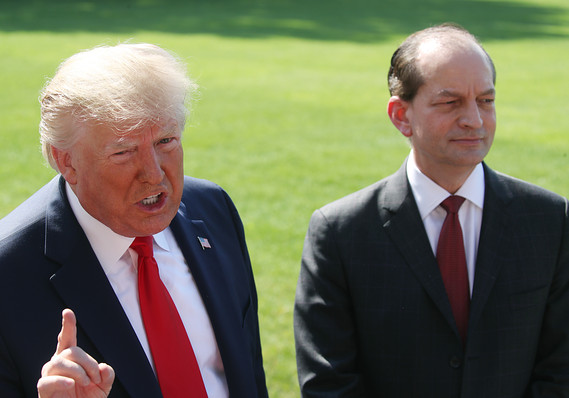 Getty Images
President Donald Trump stands with Labor Secretary Alex Acosta, who announced his resignation, while talking to the media at the White House Friday in Washington, D.C.

Speaking in Milwaukee, Wisc., Trump said called the USMCA “the most modern, cutting edge trade agreement in history” and urged lawmakers to send it to his desk “immediately.” House Speaker Nancy Pelosi, a California Democrat, has raised concerns about labor and environmental standards in the deal, and members of her party have been meeting in working groups on those issues.

It was the president’s sixth visit to Wisconsin since taking office . Trump was the first Republican to win the state since Ronald Reagan in 1984, and is investing in it again as he revs up his 2020 campaign engine.

Trump attended a Milwaukee-area fundraiser while in the state, and was scheduled to speak at a fundraiser in Ohio — a perpetual battleground — on Friday night. The Cleveland and Milwaukee fundraisers are expected to net a combined $7 million, according to the Republican National Committee.

Before departing from the White House Trump again lashed out at former House Speaker Paul Ryan, the Wisconsin native who made unflattering comments about the president in a new book.

“Paul Ryan was not a talent,” Trump said, adding: “the only success Paul Ryan had was the time he was with me.” At the same time, Trump defended current House Speaker Pelosi, saying “she is not a racist.” Fellow Democrat Alexandria Ocasio-Cortez, a New York congresswoman, has accused Pelosi of “singling out” her and fellow newcomers, all women of color.

Trump announced the resignation of Labor Secretary Alexander Acosta, who quit after renewed scrutiny of his handling of a 2008 secret plea deal with financier Jeffrey Esptein, who is accused of sexually abusing dozens of underage girls.

“I hate to see this happen,” Trump said, according to the Associated Press. He said he did not ask Acosta to leave the Cabinet.

Trump said Acosta would be replaced on an acting basis by Patrick Pizzella, the current deputy labor secretary. Pizzella is a former lobbying partner of disgraced business lobbyist Jack Abramoff , and becomes the latest Trump official to assume “acting” status. More than a dozen federal departments or agencies are operating with temporary heads instead of a permanent leader , writes USA Today.

The president also said a nationwide immigration enforcement operation targeting people who are in the U.S. illegally will begin Sunday — a move that has sparked outrage and concern among immigrant advocates.