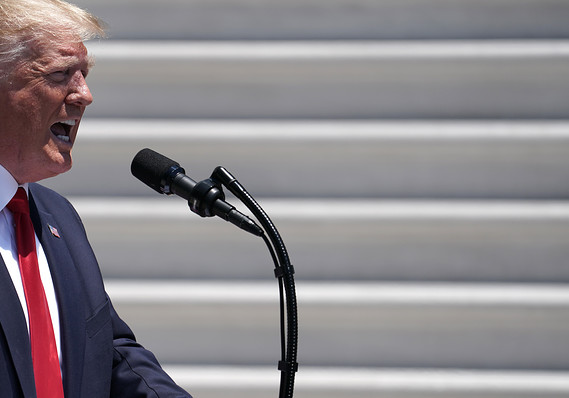 Getty Images
President Donald Trump delivers remarks during his 'Made In America' product showcase at the White House on Monday in Washington.

President Donald Trump on Monday stepped up attacks on four Democratic congresswomen, as he signed an order on U.S. manufacturing and took a victory lap over the Chinese economy.

Trump again blasted four Democratic lawmakers, all of them women of color, a day after saying on Twitter that they should “go back” to where they came from.

Asked by a reporter at the White House if he believed the women were not American, Trump replied, “If somebody has a problem with our country, if someone doesn’t want to be in our country, they should leave. That’s all.”

The four women are Reps. Alexandria Ocasio-Cortez of New York, Ilhan Omar of Minnesota, Rashida Tlaib of Michigan and Ayanna Pressley of Massachusetts. The president later singled out Omar, who has been critical of Israel’s influence in Washington, by saying she “hates Israel” and “hates Jews...it’s very simple.”

The controversy involving the Democratic lawmakers began Sunday, when Trump tweeted that they should “go back” and fix the “totally broken and crime infested places from which they came.” All but Omar, who was born in Somalia, were born in the U.S.

Monday, a handful of Republican lawmakers, including Rep. Will Hurd of Texas and Sen. Pat Toomey of Pennsylvania, joined Democrats in criticizing Trump’s rhetoric. The four congresswomen are planning a late Monday news conference to address Trump’s remarks.

Now read: Trump saddled with ‘racist in chief’ hashtag after his latest tweetstorm.

In an executive order, Trump required products “Made in America” to be made using more American components if they are to be used by the government.

As the Associated Press wrote, Trump said American-made products used for government projects currently can contain 50% foreign components and still be considered American. He signed an order boosting the percentage of American components to 75% . Trump signed the order during an annual White House “Made in America” showcase. Manufacturers from all 50 states were represented.

Trump signed the order after giving himself credit, in a pair of tweets, for a slowdown in the Chinese economy that he said would lead to more favorable trading terms with Beijing. Sunday night, China reported second-quarter GDP growth of 6.2%, the worst showing in at least 27 years. Trump said on Twitter that China wants to make a trade deal and insisted that U.S. taxpayers aren’t paying for tariffs.