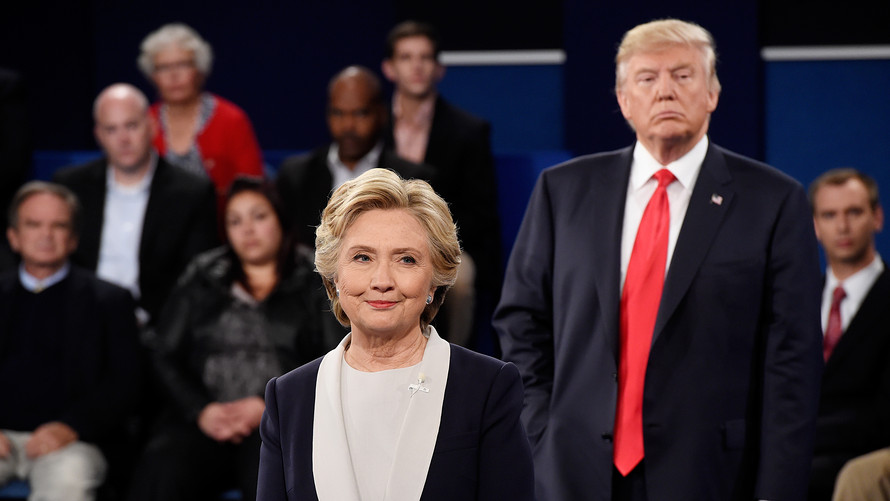 Take with a grain of salt any forecast about which stocks will do well if Joe Biden wins the U.S. presidency. To be sure, these forecasts can make for interesting reading, but to paraphrase a quotation from Warren Buffett, their only value is to make fortune tellers look good.

Consider what happened four years ago when analysts were trying to guess which stocks would do well during a Clinton administration and which under a Trump administration. They couldn’t have been more wrong.

From two different websites at the time I collected 25 stocks that would supposedly thrive if Clinton were elected and 23 stocks to bet on in anticipation of a Trump victory. I calculated these stocks’ return from their closing prices on 2016’s Election Day (until Oct. 1, 2020). The chart below tells the embarrassing story of the data: 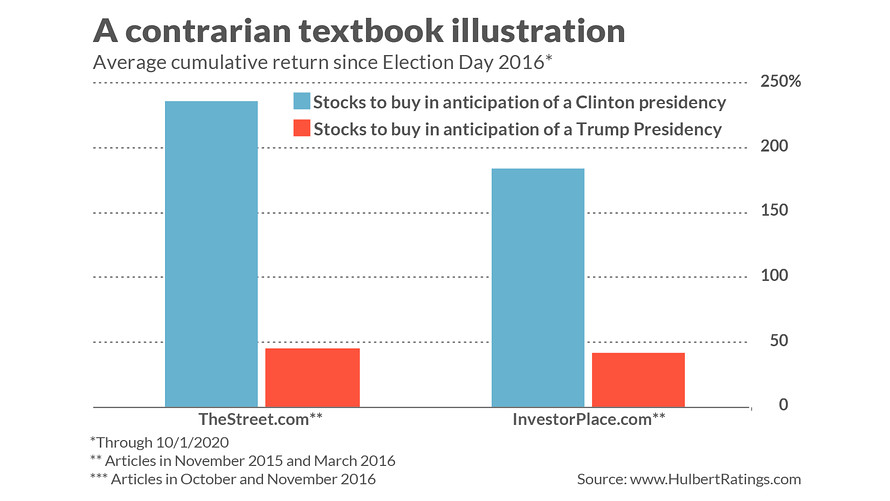 Stocks that were supposed to thrive in a Trump administration have significantly lagged the overall U.S. market, on average. One website’s “Trump stocks” gained an average of 41% over the nearly four-year period to October 1 of this year, and the other website’s group gained 45%. Meanwhile, the S&P 500 /zigman2/quotes/210599714/realtime SPX -1.51%   rose 71% (returns are cumulative, not annualized, and include dividends).

Over the same period, “Clinton stocks” soared, on average. One website’s Clinton stocks gained an average of 184%; in the case of the other, 236%.

Perhaps the biggest error came in predicting how the stock market would react to a Trump victory. Two weeks before the 2016 election, CNN reported that “if Donald Trump wins the election, U.S. stocks… will almost certainly tank.” The network reported that one Wall Street firm was forecasting an 8% drop in that event; a major think-tank predicted a 10% to 15% drop.

In reality, the stock market soared following Trump’s victory. The Dow Jones Industrial Average /zigman2/quotes/210598065/realtime DJIA -1.71%  gained 1.4% on the day after Election Day and has kept going up from there.

Though the error of these forecasts from four years ago is extreme, they are not unique in being wide of the mark. When analyzing the stock market’s returns over the past century during Democratic and Republican presidencies, historians have struggled to find statistically significance differences.

As has been widely reported, the stock market has produced modestly superior average gains during Democratic than Republican presidencies. But even this difference appears to be the consequence of a statistical and methodological flaw.

Part of the problem is the same one all forecasters face: predicting is difficult, as they say — especially about the future.

For example, it made perfect sense four years ago that a Trump presidency would be good for coal companies. Candidate Trump had promised that he would reopen coal mines in Appalachia that were closed. Yet the coal company that was on one of the lists of Trump stocks — CNX Resources /zigman2/quotes/208647486/composite CNX -0.06%   (formerly Consolidated Energy) — has lost 34% since the day Trump was elected to October 1 of this year.

Likewise, it was entirely plausible that a Trump presidency would be good for the oil industry. But shares of Exxon Mobil /zigman2/quotes/204455864/composite XOM -1.54%  , also on Trump stock lists in 2016, lost 54% since the day Trump was elected.

Forecasting’s inherent difficulty is only part of the problem. Forecasters have an even bigger challenge when it comes to predicting the market’s reactions to the political parties: those parties’ economic policies are not consistent over time. Over the past 150 years, for example, there have been times when the Democratic Party was the party of limited government and other times when the Republican Party was. Similar flip-flops of the two parties have been the case when it comes to free trade and protectionism.

Indeed, according to some political historians, on every major issue there have been times in U.S. history when the Democratic Party was in favor and the Republican Party opposed, and other times when it was just the reverse. No wonder that forecasters have such difficulty predicting how a president from one party or the other will impact the stock market.

So think hard before acting on the forecasts of which stocks will perform best in a Biden or Trump presidency.

More: These are the ETFs to help you prepare for a Biden presidency

Plus: Here are stocks that stand to benefit under different U.S. election outcomes