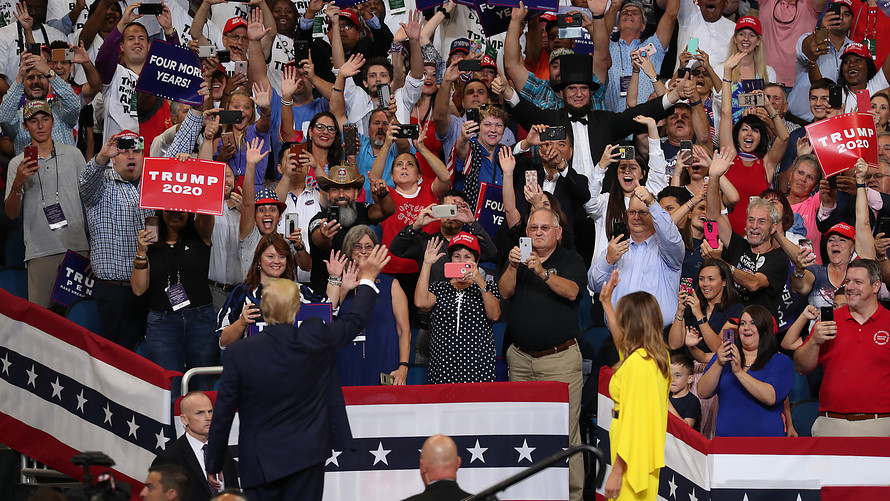 Getty Images
U.S. President Donald Trump and First Lady Melania Trump arrive as President Trump prepares to announce his candidacy for a second presidential term at the Amway Center on June 18, 2019 in Orlando, Florida. President Trump is set to run against a wide open Democratic field of candidates.

President Donald Trump threatened Monday to pull the Republican National Convention out of North Carolina if the state’s Democratic governor, Roy Cooper, doesn’t immediately sign off on allowing a full-capacity gathering in August despite the ongoing COVID-19 pandemic.

On Friday, Cooper moved the state into a second phase of gradual reopening by loosening restrictions on hair salons, barbers and restaurants. But he said the state must continue to closely watch virus trends and has ordered indoor entertainment venues, gyms and bars to remain closed for several more weeks.

“Unfortunately, Democrat Governor, @RoyCooperNC is still in Shutdown mood & unable to guarantee that by August we will be allowed... full attendance in the Arena,” Trump tweeted Monday.

He added that Republicans “must be immediately given an answer by the Governor as to whether or not the space will be allowed to be fully occupied. If not, we will be reluctantly forced...to find, with all of the jobs and economic development it brings, another Republican National Convention site.”

Cooper’s office did not immediately respond to an email seeking comment on the tweets.

See: Ohio’s governor, a Republican, urges people to wear face masks: ‘This is not about politics’

“What you hear the president saying today is just a very reasonable request of the governor of North Carolina. We all want to be in Charlotte. We love North Carolina,” Pence said. “But having a sense now is absolutely essential because of the immense preparations that are involved, and we look forward to working with Governor Cooper, getting a swift response and, if needs be, if needs be, moving the national convention to a state that is farther along on reopening and can say with confidence that we can gather there.”

A week ago, Republican National Committee Chairwoman Ronna McDaniel asserted on a call with reporters that the convention slated for Aug. 24-27 would be held at least partly in person. She said the party enlisted a medical adviser and was consulting with the Charlotte mayor and the governor.

Several days later, during a Charlotte-area visit, a top Trump administration health official sounded less certain. Asked about preparations to safely host the RNC, Health and Human Services Secretary Alex Azar said increasing testing capacity is important. However, he did not refer to a traditional in-person convention as a certainty, but rather noted that “we’re several months away from the possibility of the RNC.”

Before Monday, Cooper and Trump had yet to publicly spar during the pandemic. While Cooper has urged the federal government to help North Carolina get more testing supplies and protective gear, he’s avoided criticizing Trump by name. Trump, meanwhile, has largely refrained from calling out Cooper as he has several other Democratic governors.

Cooper, who narrowly beat an incumbent Republican in 2016 while Trump was carrying the state and its 15 electoral votes by 2.6 percentage points over Democrat Hillary Clinton, faces a challenge in November’s gubernatorial race from Republican Lt. Gov. Dan Forest, who has urged a fast reopening of state businesses.