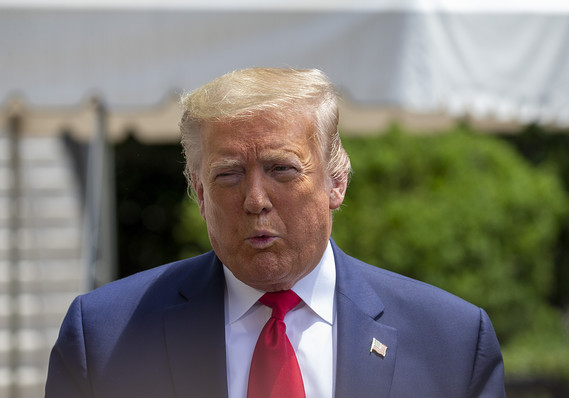 Getty Images
President Donald Trump walks out of the White House on May 30.

President Donald Trump blasted governors as “weak” over their responses to weekend demonstrations in U.S. cities, telling them to get tougher on protesters amid outrage sparked by the death of George Floyd while he was in police custody.

Floyd, a black man, died after he was pinned at the neck for several minutes by a white Minneapolis police officer.

Now read: Picking up the pieces after a shattering weekend of protest and violence from coast to coast and virtually every in between.

Barr, reported the Associated Press, was on Trump’s call and told governors they have to “dominate” the streets and control, not react to crowds. He’s called on them to “go after troublemakers” and use “adequate force.”

On Sunday, Trump said the U.S. would designate anti-fascism activists as a terrorist organization. But as the New York Times reported, his declaration against antifa, which the administration sought to blame for violent protests, lacked clear legal authority . Antifa doesn’t have a leader or a centralized structure, as the Times writes.

The American Civil Liberties Union said Trump did not have the authority to designate a domestic terrorist group.

As Trump sought to blame antifa for the protests, there wasn’t agreement on who was behind them.

“The truth is, nobody really knows,” said Keith Ellison, Minnesota’s attorney general, in a Sunday appearance on “Meet the Press.” He said he had reports some protesters were from inside Minnesota, and that some were from “out of town.”

New York Police Department investigators said on Sunday they believed outside anarchist groups coordinated efforts to incite violence during the weekend protests in the city, the Wall Street Journal wrote.

Democratic Govs. Tim Walz of Minnesota and Gretchen Whitmer of Michigan pushed back on Trump’s comments urging them to “dominate” protesters . Walz said he took issue with Trump’s emphasis on a “posture of force,” saying it was unsustainable, both “militarily” and “socially,” the Washington Post reported.

U.S. stocks (DOW:DJIA)   rose on Monday on hopes that the worst of the economic downturn is over for the U.S. economy, as states reopen from shutdowns imposed due to the coronavirus pandemic.

—with the Associated Press