Trump Today: President says migrants are coming to U.S. like it’s Disneyland as he escalates trade fight with Europe 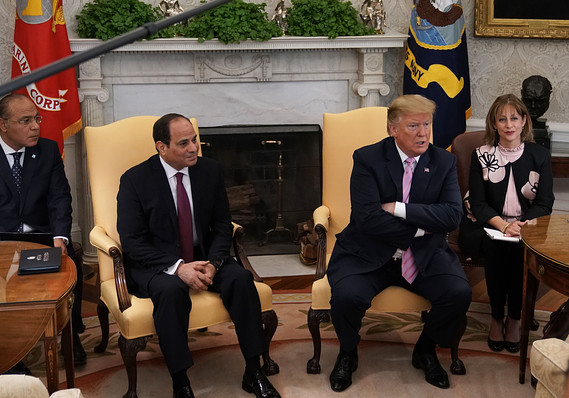 President Donald Trump ramped up his rhetoric on immigration Tuesday, saying migrants are coming to the U.S. like it’s “Disneyland,” as he escalated a trade fight with Europe.

Amid reported signs the administration is mulling a return of Trump’s decision to separate migrant children from their parents, the president said he wasn’t looking to reinstate it, then implied it was an effective way to stem border crossings.

“Once you don’t have it, that’s why you have many more people coming,” Trump said in the Oval Office alongside visiting Egyptian President Abdel Fattah Al Sisi. “They are coming like it’s a picnic, like ‘let’s go to Disneyland,” Trump said.

Trump also claimed it was the Obama administration that began the practice of separating migrant children from adults at the southern border, but fact checks have found that not to be the case . Both presidents have housed “unaccompanied” minors in temporary facilities, but in the Obama era, most arrived in the U.S. without parents or guardians .

Trump was asked about Sisi’s attempt to extend his term to 2034 and replied, “I don’t know about the effort. I can just tell you he’s doing a great job.”

As his administration moved toward imposing tariffs on around $11 billion in imports from Europe, Trump said in a tweet that the European Union “has taken advantage of the U.S. on trade for many years. It will soon stop!”

Read: U.S. threatens $11.2 billion worth of tariffs on EU goods.

But tariffs won’t be imposed right away. At issue are U.S. tariffs aimed at offsetting what the administration says are unfair subsidies for plane maker Airbus /zigman2/quotes/200706109/delayed EADSY -0.92% . On Monday, the U.S. Trade Representative’s office released a list of EU products it would hit with tariffs in anticipation of a World Trade Organization ruling this summer.

The administration’s step comes amid a wider trade conflict with the EU. In June 2018, Trump imposed tariffs of 25% on steel imports and 10% aluminum imported from the bloc. The EU responded with tariffs on about $3.4 billion of U.S. products. What’s more, Trump has held out the threat of tariffs on European cars. The two sides have been in talks since July about scaling back the tariffs.

The renewed trade tensions, coupled with a weaker global outlook from the International Monetary Fund, helped spur a retreat for U.S. stocks /zigman2/quotes/210598065/realtime DJIA -0.78%  on Tuesday.