Trump says discussions with China are ‘moving along nicely’ 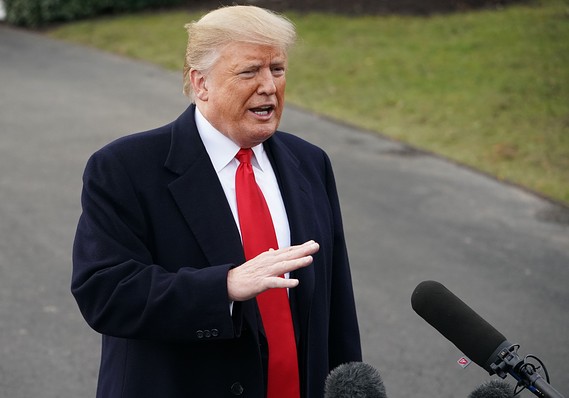 President Donald Trump said his administration is finalizing a plan to end what he called the abuse of the U.S. asylum system, as he also signaled progress on trade after speaking with China’s president.

The president said “massive cities of tents” have been ordered to hold migrants illegally entering the U.S., as he announced proposed changes to asylum policy. Trump said migrants would have to present themselves lawfully at a port of entry into the U.S., and that the U.S. would no longer release apprehended migrants before their immigration or asylum hearings. “They’ll wait for long periods of time,” he said.

Speaking in the Roosevelt Room of the White House, Trump said he’d issue a comprehensive executive order on immigration next week.

As the Associated Press pointed out, it’s questionable if Trump has the legal authority to proceed with an asylum-policy change . U.S. law says that anyone who arrives to the country may apply for asylum.

The announcement was his latest focus on immigration with the midterm elections just days away. “Asylum is not a program for those living in poverty,” Trump said. “The United States cannot possibly absorb them all.”

Trump said on Twitter that he’d spoken with China’s Xi Jinping about “many subjects, with a heavy emphasis on Trade.” U.S. stocks /zigman2/quotes/210598065/realtime DJIA +1.39%   added to their gains after Trump hinted at progress by saying the discussions were “moving along nicely.” The two leaders are scheduled to meet at a G-20 summit in Argentina later this month.

Trump’s conversation with Xi came the same day the U.S. accused a Chinese company and its Taiwanese partner of stealing trade secrets from Micron Technology Inc. /zigman2/quotes/205710729/composite MU -0.49% . It’s the latest in a string of high-profile espionage cases against China.

In a slap at the regime of President Nicolas Maduro, Trump signed an executive order banning Americans from dealing with entities involved with what National Security Adviser John Bolton called “corrupt or deceptive” gold sales from Venezuela.

Bolton said in a speech in Miami that Venezuela had used its gold   sector to finance illicit activities and support criminal groups.