‘Can’t win them all,’ president says 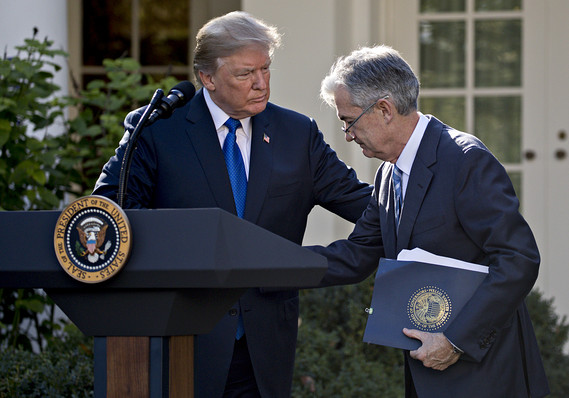 Enlarge Image
President Donald Trump shakes hands with Jerome Powell during a nomination announcement in the Rose Garden in November 2017.

President Donald Trump on Thursday toned down his criticism of Federal Reserve Chairman Jerome Powell after he said he detected a willingness by the U.S. central bank to cut interest rates.

Asked during an Oval Office event about the Fed decision to hold interest rates steady on Wednesday, Trump said: “Well I guess they indicated they are going to be lowering them [interest rates].”

“He [Powell] should have done it sooner. Can’t win them all,” Trump said.

“Eventually he will do what’s right. Perhaps, let’s see what he does,” Trump added.

The president did not mention his administration’s review earlier this year of the legality of demoting Powell from his Fed chairmanship to be just a governor.

Read: Trump on potential Powell demotion: ‘Let’s see what he does’

For his part, Powell told reporters he did not think he could be demoted.

“I think the law is clear that I have a four-year term and I fully intend to serve it,” he said.

Asked later if he might at some point publicly or privately “push back” on Trump’s criticisms, Powell said that he would not discuss the president’s views any further.

“I don’t discuss elected officials publicly or privately really. So I would just say we are...deeply committed to carrying out our mission. And also that our independence from direct political control we see as an important institutional feature that has served both the economy and the country well,” the Fed chairman said.

Economists think there is a high likelihood the Fed cuts interest rates at its next meeting at the end of July.

See: What would it take to stop a Fed interest rate cut in July. A lot, economists say

Stocks were higher Thursday with the Dow Jones Industrial Average /zigman2/quotes/210598065/realtime DJIA +2.17%   up more than 168 points in anticipation of monetary policy easing from the central bank.