Trump touches down in Wisconsin fresh off verbal fusillade vs. Paul Ryan 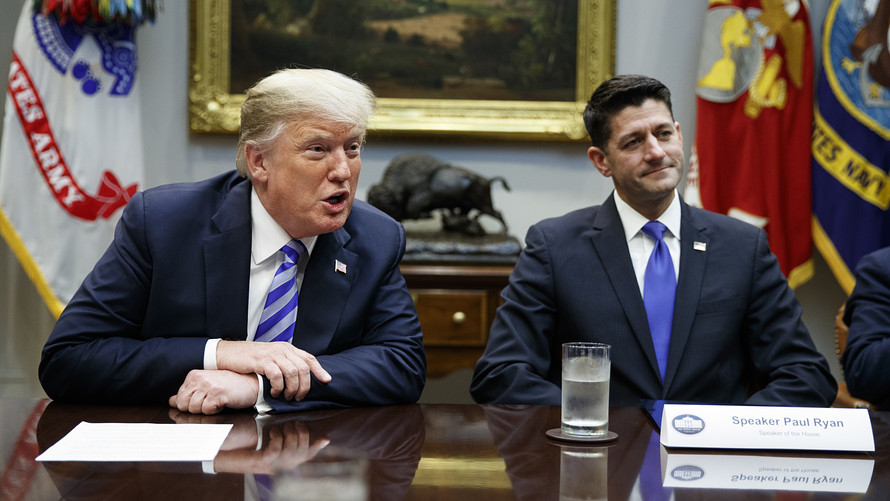 Associated Press
Then–Speaker of the House Paul Ryan, the Wisconsin Republican, listens as President Donald Trump speaks during a September 2018 meeting with GOP lawmakers in the Roosevelt Room of the White House.

WASHINGTON (AP) — President Donald Trump loves to reminisce about his upset Wisconsin win in the 2016 election after Democrat Hillary Clinton took the state for granted.

He’s determined not to make the same mistake himself.

With Wisconsin now a pivotal state for the president’s reelection chances, Trump headed there Friday for his sixth visit to the state since taking office.

Trump is making two Midwest stops designed to warm up his 2020 campaign engine with fundraisers expected to bring in a combined $7 million, according to the Republican National Committee. He’ll also try to showcase the strong economy and push for Congress to pass the United States-Mexico-Canada Agreement, which could squarely impact Wisconsin.

He became the first Republican to win Wisconsin since Ronald Reagan in 1984, defeating Clinton by just 22,748 votes. Along with Michigan and Pennsylvania, the Rust Belt state was meant to be the Democrats’ safety net against Trump, but Clinton failed to visit the state even once during the general election campaign — a fact the president has mentioned time and time again.

“The Republicans haven’t won the great state of Wisconsin in decades,” Trump incongruously reminisced in Florida in March. “I went there a lot and in all fairness, her husband Bill, who’s a good politician — they didn’t listen to him. He said, ‘You better go to Wisconsin.’ ”

But the state remains starkly divided over the president and appears a toss-up again in 2020.

From the archives (April 2016): Wisconsin primary may not be Trump’s Waterloo, but the state is worth watching

On the eve of his Friday trip, Trump lashed out at one of Wisconsin’s favorite sons, former House Speaker Paul Ryan, over his unflattering comments about the president in a new book.

“Paul Ryan, the failed V.P. candidate & former Speaker of the House, whose record of achievement was atrocious (except during my first two years as President), ultimately became a long running lame duck failure, leaving his Party in the lurch both as a fundraiser & leader,” Trump tweeted late Thursday.

Trump spoke of Ryan in similarly harsh terms early Friday as he took questions from reporters on the South Lawn following the announcement that Labor Secretary Alex Acosta had resigned amid controversy over his handling of the Jeffrey Epstein case while serving as a U.S. attorney in Florida.

In a troubling sign for Trump’s 2020 electoral chances in the Dairy State, Democrats swept every statewide office in the 2018 midterm elections.

In the most notable victory for Democrats, Tony Evers defeated Republican Gov. Scott Walker after eight years in office. Republicans retained their tight grip on the state legislature but benefited from district boundaries they redrew to consolidate their power in 2011. And Republicans pushed back this past spring, when conservative Brian Hagedorn won election to the state Supreme Court.

The Trump campaign believes the state is winnable and plans an all-out blitz there. But the president’s approval rating has slipped in several key Midwest battlegrounds.

Trump’s Twitter blast against one of Wisconsin’s highest-profile figures appeared to stem from anger over Ryan’s comments in a new book, “American Carnage,” by Tim Alberta of Politico. In it, Ryan faults Trump for “knee-jerk reactions.”

Ryan did not seek re-election in 2018. Democrats took the House majority, a fact Trump noted in his tweets.

“He had the Majority & blew it away with his poor leadership and bad timing. Never knew how to go after the Dems like they go after us. Couldn’t get him out of Congress fast enough!”

In Milwaukee, Trump will attend a fundraiser and visit Derco Aerospace Inc., a subsidiary of aviation giant Lockheed Martin (NYS:LMT) that provides parts, logistics and repair services to fixed-wing aircraft. White House officials said Trump would use the visit to push for the USMCA, whose fate is uncertain in Congress.

Kurt Bauer, president of Wisconsin Manufacturers and Commerce, the state’s largest business group, said it’s no coincidence that Trump decided to promote the USMCA in a swing state where the manufacturing sector contributes nearly 20% to the state’s gross domestic product. Bauer said a new agreement with Mexico and Canada would cement markets with the state’s top two export targets.

“Having an agreement with those two countries is absolutely pivotal” for Wisconsin manufacturers, Bauer said.

The agreement allows the U.S. to increase the amount of dairy exports to Canada and removes retaliatory tariffs Mexico has placed on U.S. exports, Gefvert said, which could boost Wisconsin cheese exports by making them cheaper.

Derco Aerospace was accused of fraud in a 2014 lawsuit by the federal government that alleges it and two related companies schemed to overbill on a Navy contract for airplane maintenance. The case is pending in federal court in Milwaukee. The companies have denied wrongdoing.

After visiting Wisconsin, Trump will travel to Ohio for a fundraising dinner in Cleveland. Democrats are criticizing the president for appearing with Brian Colleran, a nursing-home magnate who was forced to pay $19.5 million by the Justice Department for his role in a Medicare fraud scheme.