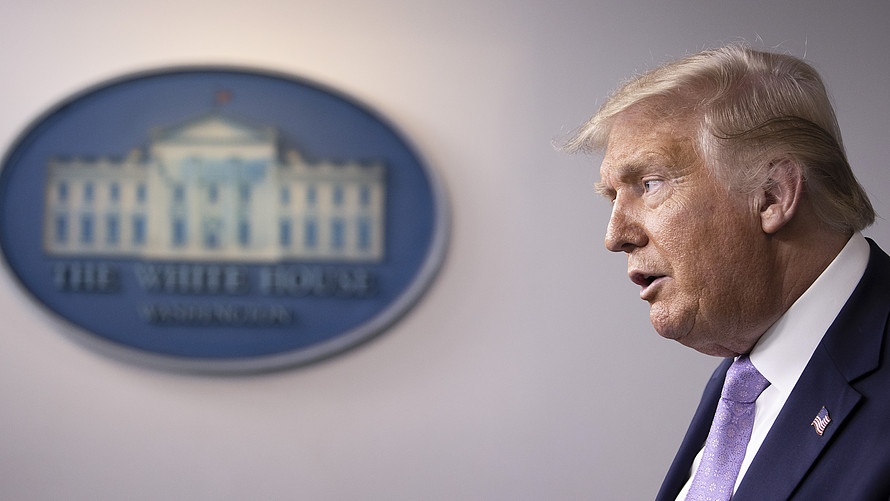 President Donald Trump on Thursday evening blasted Joe Biden’s call for a national mask mandate, challenged the security of mail-in voting and questioned the eligibility of Kamala Harris to serve as vice president, during a wide-ranging news briefing ostensibly convened to provide updates and information about America’s battle against the worst public health crisis in a generation.

“We will continue to urge Americans to wear masks when they cannot social distance, but we do not need to bring the full weight of the federal government down on law-abiding Americans to accomplish this goal,” he declared at Thursday’s briefing, criticizing comments Biden had made earlier in the day.

“It’s up to the governors, and we want to have a certain freedom,” the president said, adding that each state is “facing unique circumstances” in their fight against the disease.

“Americans must have their freedoms, and I trust the American people,” he said.

The comments from the president come after presumptive Democratic presidential nominee Joe Biden on Thursday called for a national mask mandate to limit the spread of COVID-19, stepping up his rhetoric on the issue after criticizing Trump’s own stance earlier this summer and having called on the president as early as January, in a USA Today op-ed , to take the coronavirus more seriously than he was doing.

Biden, speaking during a brief appearance before reporters in Wilmington, Del., said that “every single American should be wearing a mask when they’re outside for the next three months at a minimum.”

Trump blasted Biden for what he described as politicizing the viral outbreak to score “political points,” though he used much of the coronavirus press briefing in an attempt to highlight differences between the former vice president and himself as the race for the White House heats up with Biden’s selection this week of Sen. Kamala Harris of California as his running mate. “Stop playing politics with the virus,” Trump said at one point.

The president also emphasized his optimism about the prospects for a vaccine and remedies for the deadly illness.

Opinion: Here’s a pandemic stock tip: Buy on the rumor of a COVID-19 vaccine, sell on the news

The global tally of confirmed cases of COVID-19 climbed to 20.6 million on Thursday, with the death toll rising to 749,656, according to data aggregated by Johns Hopkins University. At least 12.8 million people are confirmed to have recovered. The U.S. has had 5.19 million cases, and COVID-19–related deaths stand at 166,027.

Meanwhile, Trump attempted to tamp down a public outcry to comments he’d made about not funding the U.S. Postal Service and criticism of mail-in voting during a Fox Business Network interview , when he was asked about issues preventing a deal with Democratic lawmakers on another coronavirus relief package,

The president said he would rather not provide funding to the USPS and encouraged voters to physically travel to voting stations even if the virus was still not under control on Election Day on Nov. 3.

From the archives (December 2019): Trump campaign adviser tells Wisconsin Republicans in secret recording that voting-place tactics will be stepped up

“We want to have an accurate vote,” he said, suggesting that voting by mail is vulnerable to fraud. “I am not saying anything wrong with voting, I want them to vote, but that would mean they would have to go to a voting booth like they used to and vote,” he said.

“We want people to vote so when they vote it means one vote. It doesn’t mean ballots all over the place,” Trump continued.