Trump wary of ‘perjury trap,’ says he could intervene in Mueller probe 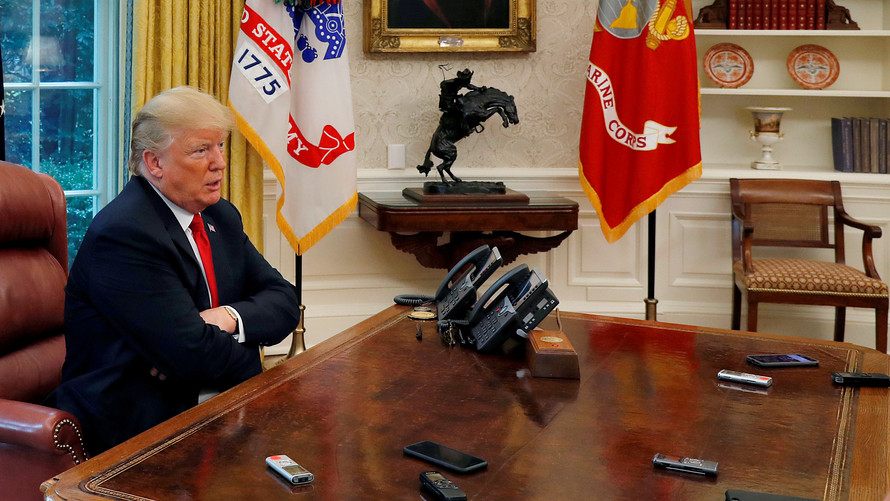 Reuters
President Donald Trump answers a reporter's question as eight different phones and recording devices placed on his desk by reporters and White House staff members record his words during an interview with Reuters on Monday.

President Donald Trump said Monday that an interview with special counsel Robert Mueller could be a “perjury trap” for him, and maintained that he has the power to intervene in the investigation.

In a wide-ranging interview with Reuters that was published late Monday, Trump declined to say whether he’d agree to an interview with Mueller, but said he worried that Mueller could use any contradictory statements against him. “So if I say something and he (Comey) says something, and it’s my word against his, and he’s best friends with Mueller, so Mueller might say: ‘Well, I believe Comey,’ and even if I’m telling the truth, that makes me a liar. That’s no good,” Trump said.

He once again criticized Mueller’s probe into Russian interference in the 2016 election, calling it a disgrace, and suggested he could remove Mueller and “do whatever” he wants, but he has chosen not to.

“I can go in, and I could do whatever — I could run it if I want. But I decided to stay out. I’m totally allowed to be involved if I wanted to be. So far, I haven’t chosen to be involved. I’ll stay out.”

On other subjects, Trump said:

• The Fed should do more to help improve the economy, and he was “not thrilled” with Fed Chairman Jerome Powell for raising interest rates. “I’m not thrilled with his raising of interest rates, no. I’m not thrilled,” Trump said . As for the Fed, Trump said: “We’re negotiating very powerfully and strongly with other nations. We’re going to win. But during this period of time I should be given some help by the Fed.” He also said China is “absolutely” manipulating its currency, and the EU likely is too.

• He thinks it’s “very dangerous” for Facebook Inc. /zigman2/quotes/205064656/composite FB +2.03%   and Twitter Inc. /zigman2/quotes/203180645/composite TWTR +2.94%   to ban certain content from their services. “I won’t mention names but when they take certain people off of Twitter or Facebook and they’re making that decision, that is really a dangerous thing because that could be you tomorrow,” Trump said . Facebook, among others, recently suspended the account of right-wing conspiracy theorist Alex Jones’s Infowars website, citing user-policy violations concerning hate speech, harassment and violent speech, and Twitter blocked Jones from tweeting for seven days.

• He has low expectations for this week’s trade talks with China. Trump told Reuters he has “no time frame” for ending the trade dispute, and did not “anticipate much” from the upcoming talks. Meanwhile, his administration is moving forward on tariffs on $200 billion in Chinese goods.

• The U.S. will make “no concessions” to Turkey until they release an American pastor, and he is “not concerned at all” if tariffs on Turkish steel and aluminum hurt that nation’s economy. “I think it’s very sad what Turkey is doing. I think they’re making a terrible mistake. There will be no concessions,” Trump said .