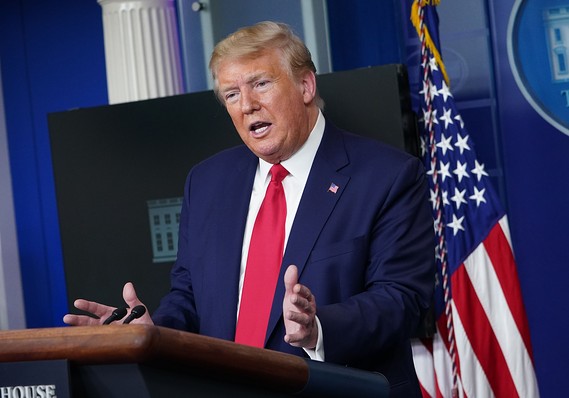 As President Donald Trump has persistently discussed the malaria drug hydroxychloroquine, critics have wondered about his motivation, given the drug’s far-from-certain performance on the global stage as a treatment for coronavirus, and the Food and Drug Administration’s refusal so far to approve it as a treatment for COVID-19.

The New York Times says Trump has a “small personal stake” in Sanofi, the French drug manufacturer that produces the drug.

The report doesn’t say how small, but it notes that his three family trusts have investments in a Dodge & Cox mutual fund whose largest holding is Sanofi. A fund that matches this description is the Dodge & Cox International Stock Fund (NAS:DODFX) , which at last check was 3.3% invested in Sanofi.

It turns out he does look to have more than that modest sum invested in Sanofi, because, unmentioned in the Times report, his trusts also hold broader European stock-market index funds.

The iShares Core MSCI EAFE ETF (BATS:IEFA)  has 0.67% of its holdings in Sanofi, and Sanofi is a 0.78% holding for the iShares MSCI EAFE ETF (PSE:EFA) , which is neither surprising nor notable, in that the French drug maker is so large.

And Trump has a small stake in basically every big company you can think of.

Another point worth making is how little the malaria drug means to Sanofi’s bottom line. In 2019, what the company calls Plaquenil wasn’t even broken out by name in the company’s financial accounts, while 33 other medications were.

That is hardly surprising as the drug has been around since the 1950s and is available generically.

A host of other companies are making the medication, including Amneal Pharmaceuticals (NYS:AMRX) , Mylan (NAS:MYL)  and Teva Pharmaceutical (NYS:TEVA) .

Read on: There’s scant evidence so far for chloroquine as a COVID-19 drug — but there’s already a shortage