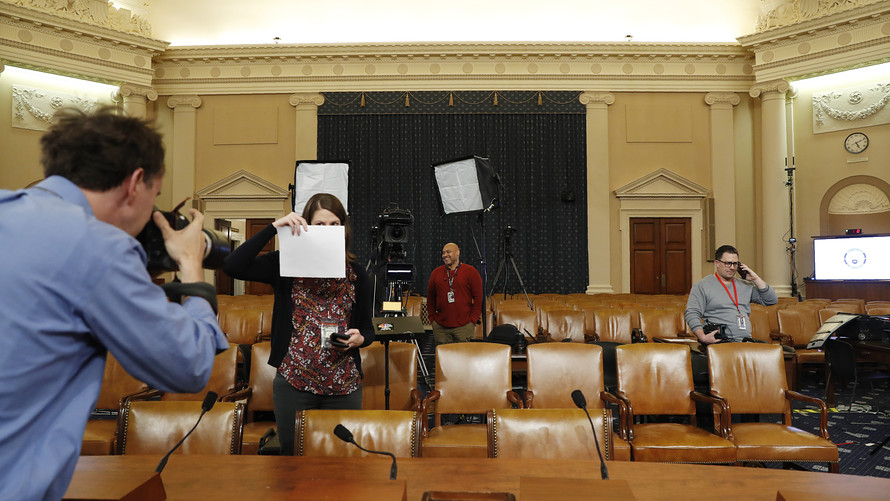 Associated Press
A photographer sets a white balance in the hearing room ahead of the first public impeachment inquiry hearing on Wednesday.

When the gavel strikes at the start of the House hearing on Wednesday morning, America and the rest of the world will have the chance to see and hear for themselves for the first time about President Donald Trump’s actions toward Ukraine and consider whether they are, in fact, impeachable offenses.

It’s a remarkable moment, even for a White House full of them.

Barron’s on MarketWatch: Here’s what the Trump impeachment hearings mean for the markets

All on TV, committee leaders will set the stage, then comes the main feature: Two seasoned diplomats, William Taylor, the graying former infantry officer now charge d’affaires in Ukraine, and George Kent, the deputy assistant secretary in Washington, telling the striking, if sometimes complicated story of a president allegedly using foreign policy for personal and political gain ahead of the 2020 election.

So far, the narrative is splitting Americans, mostly along the same lines as Trump’s unusual presidency. The Constitution sets a dramatic, but vague, bar for impeachment, and there’s no consensus yet that Trump’s actions at the heart of the inquiry meet the threshold of “high crimes and misdemeanors.”

Whether Wednesday’s proceedings begin to end a presidency or help secure Trump’s position, it’s certain that his chaotic term has finally arrived at a place he cannot control and a force, the constitutional system of checks and balances, that he cannot ignore.

The country has been here just three times before, and never against the backdrop of social media and real-time commentary, including from the Republican president himself. 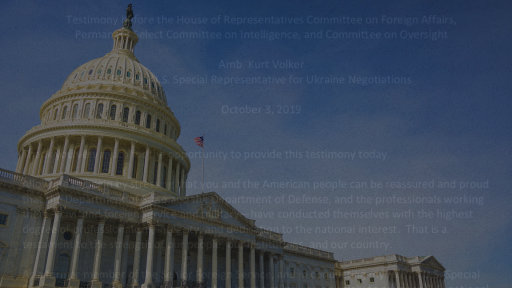 As impeachment hearings are set to go public, WSJ’s Shelby Holliday recaps what has been said behind closed doors. Illustration: Nailah Morgan

“These hearings will address subjects of profound consequence for the Nation and the functioning of our government under the Constitution,” said Democratic Rep. Adam Schiff of California, the chairman of the Intelligence Committee leading the inquiry, in a memo to lawmakers.

Schiff called it a “solemn undertaking,” and counseled colleagues to “approach these proceedings with the seriousness of purpose and love of country that they demand.”

“Total impeachment scam,” tweeted the president, as he does virtually every day.

Impeachments are rare, historians say, because they amount to nothing short of the nullification of an election. Starting down this road poses risks for both Democrats and Republicans as proceedings push into the 2020 campaign.

Unlike the Watergate hearings and Richard Nixon, there is not yet a “cancer on the presidency” moment galvanizing public opinion. Nor is there the national shrug, as happened when Bill Clinton’s impeachment ultimately didn’t result in his removal from office. It’s perhaps most like the partisanship-infused impeachment of Andrew Johnson after the Civil War.

Trump calls the whole thing a “witch hunt,” a retort that echoes Nixon’s own defense. Republicans say Democrats have been trying to get rid of this president since he took office, starting with former special counsel Robert Mueller’s investigation into Russian interference to help Trump in the 2016 election.

Democratic House Speaker Nancy Pelosi was initially reluctant to launch a formal impeachment inquiry. As Democrats took control of the House in January, Pelosi said impeachment would be “too divisive” for the country. Trump, she said, was simply “not worth it.”

After Mueller’s appearance on Capitol Hill in July for the end of the Russia probe, the door to impeachment proceedings seemed closed.

But the next day Trump got on the phone.