Dollar jumps as much as 3% versus lira before trimming gains 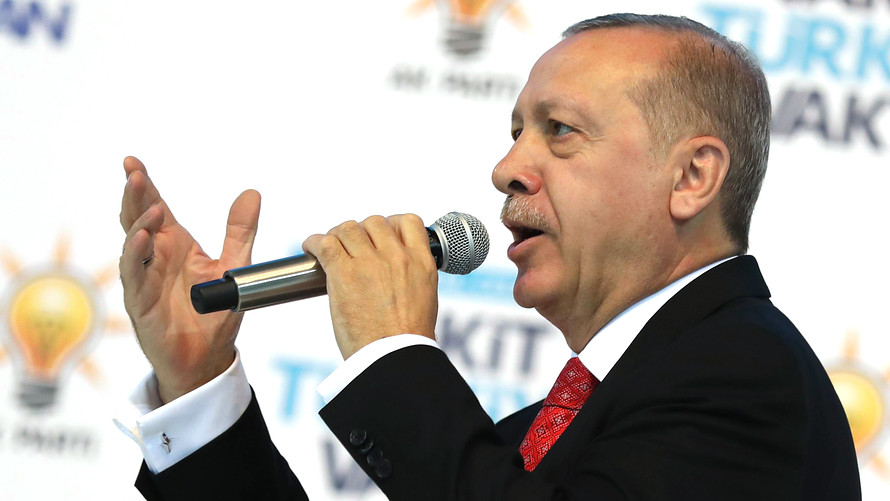 Turkish President Recep Tayyip Erdogan’s decision over the weekend to oust the country’s top central banker might elicit envy in U.S. President Donald Trump, but it runs the risk of sending Turkey into a full-blown currency crisis, analysts said Monday.

A presidential decree released on Saturday said Murat Cetinkaya, who had been in charge of the Central Bank of the Republic of Turkey, or CBRT, since 2016 had been replaced by his deputy, Murat Uysal. The decree gave no reason for replacing Cetinkaya.

In a statement , the CBRT said Uysal had emphasized that the bank would “ independently implement monetary-policy instruments focused on achieving and maintaining its primary objective of price stability in line with the duties and responsibilities granted to him by law.”

But his proclamation of independence was met by doubts from analysts. After all, Erdogan has repeatedly criticized the CBRT, which defied the president’s wishes last year in raising its main policy rate. That move has been credited with slowing inflation, which came in at 15.7% in June after peaking last year at around 25%, the Wall Street Journal noted . Erdogan has long puzzled economists by insisting that high interest rates cause high inflation.

Analysts worry that Erdogan’s efforts threaten to revive inflationary pressures and endanger the economic outlook if they result in lower rates. The CBRT’s next policy meeting is set for July 25. The central bank, in its statement, said Uysal would hold a news conference “in the coming days.”

The move revives questions about the central bank’s independence, said Vincent Mivelaz, a market analyst at Swissquote, in a note. Such questions last year contributed to a rout that saw the U.S. dollar rally around 40% versus the lira and put pressure on Turkey’s banking sector, he said.

“This scenario could well recur as a quick U-turn of monetary policy towards rate cuts at its next monetary-policy committee on 25 July 2019 will likely corroborate the statement and put upward pressures on Turkey’s inflation,” Mivelaz said.

The decision to remove Cetinkaya comes after a fall in inflation and a more stable lira did nothing to protect Erdogan’s ruling party from major losses in local elections this year, including mayoral defeats in Istanbul and Ankara, noted analysts at Stratfor, in a note.

Meanwhile, Trump spent some of his weekend piling further criticism on the Federal Reserve, telling reporters Sunday that the central bank, led by Chairman Jerome Powell, would cut rates if it “knew what it was doing.” On Friday, he complained the central bank “doesn’t have a clue.”

“Halfway across the world, someone wishes he could do the same [as Erdogan],” said Elsa Lignos, global head of foreign-exchange strategy at RBC Capital Markets, in a note, referring to Trump’s latest Fed salvo.

Indeed, analysts at Moneycorp wondered if the Erdogan move would spark a “hint of jealousy” in Washington, where Trump has repeatedly bashed the Fed under Powell, whom he appointed as chairman, for not lowering interest rates or reinstituting quantitative easing. News reports have said Trump has weighed an attempt to fire Powell.

Powell has said Trump doesn’t have the power to remove him before the end of his four-year term as chairman. Under the law, a Fed chief can be removed only “for cause,” which legal experts said is commonly understood as a severe, egregious or criminal act and not over a disagreement on monetary policy.

As for Turkey, markets had already moved to price in a rate cut at the July 25 meeting before Cetinkaya’s removal. The question now is whether a cut on that scale will be enough to placate Erdogan or he’ll continue to pressure the central bank, “opening the way to a deeper [lira] crisis,” Lignos said.

Fawad Razaqzada, an analyst at Forex.com, argued that inflation may remain on track to subside further as the global economy slows and capital controls remain in place in Turkey.

“The potential rate cuts by the CBRT could stimulate economic growth rather than lead to inflation in the coming months and years,” he said, in a note. “But for now, traders are selling the lira and will be asking questions later.”