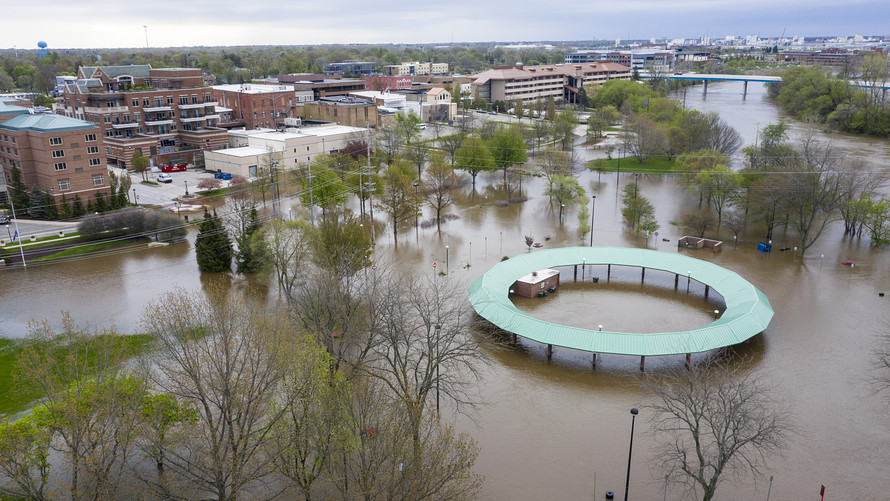 MLive.com/The Bay City Times via AP
Floodwater swamps the local farmers market and a bridge along the Tittabawassee River in Midland, Mich., on Tuesday.

EDENVILLE, Mich. — Two breached dams caused by several days of rainfall and rising water on Tuesday forced the evacuation of about 10,000 people in mid-Michigan, where the governor said one downtown could be “under approximately 9 feet of water” by morning.

For the second time in less than 24 hours, families living along two lakes and a river were ordered Tuesday to leave home.

The National Weather Service issued a flash flood watch for locations along the Tittabawassee River after the breach at the Edenville Dam in Midland County, about 140 miles north of Detroit and the Sanford Dam, about seven miles downriver from Edenville.

“Extremely dangerous flash flooding is ongoing along the Tittabawassee River in Midland county due to catastrophic dam failures at the Edenville and Sanford dams,” the weather service said on its website, noting that anyone near the river should seek higher ground immediately, be prepared for immediate evacuations, and not drive into flooded roadways. “This flooding will continue all along the length of the river in Midland county, and possibly extending into Saginaw county where a Flash Flood Watch is also in effect.”

“In the next 15 to 15 hours, downtown Midland could be under approximately 9 feet of water. We are anticipating an historic high water level,” Whitmer said.

Emergency responders went door-to-door early Tuesday morning warning residents living near the Edenville Dam of the rising water. Some residents were able to return home, only to be told to leave again following the dam’s breach.

The evacuations include the towns of Edenville, Sanford and parts of the city of Midland, which has 42,000 people, according to Selina Tisdale, spokeswoman for Midland County.

“People are communicating well and looking after each other and their loved ones,” Tisdale said. “We’re heartbroken for those with lots of home and property damage.”

Michigan Gov. Gretchen Whitmer late Tuesday declared a state of emergency for Midland County and urged residents threatened by the flooding to evacuate the area. She said shelters have opened across the county and are available to residents who need a place to go.

“This is unlike anything we’ve seen in Midland County,” she said. “If you have a family member or loved one who lives in another part of the state, go there now.”

The evacuations in Michigan followed days of heavy rains in parts of the Midwest that also brought flooding to Chicago and other parts of Illinois, Ohio and other states.

“We were back at home and starting to feel comfortable that things were calming down,” said Catherine Sias, who lives about 1 mile from the Edenville Dam and left home early Tuesday morning. “All of a sudden we heard the fire truck sirens going north toward the dam.”

Sias, 45, said emergency alerts then began coming on her cell phone and people started calling to make sure they were safe.

“While packing, there were tons of police and fire trucks going up and down the roads,” she added. “As far as I know, all of our neighbors got out.”

M-30, the state highway trunk line that’s also the main road through Edenville and the route Sias was using to evacuate, was backed up with vehicles.

While driving, she saw the rushing Tittabawassee River. “It was very dramatic, very fast and full of debris,” she said.