U.K. deaths pass 26,000 mark as figures include nursing-home cases for the first time 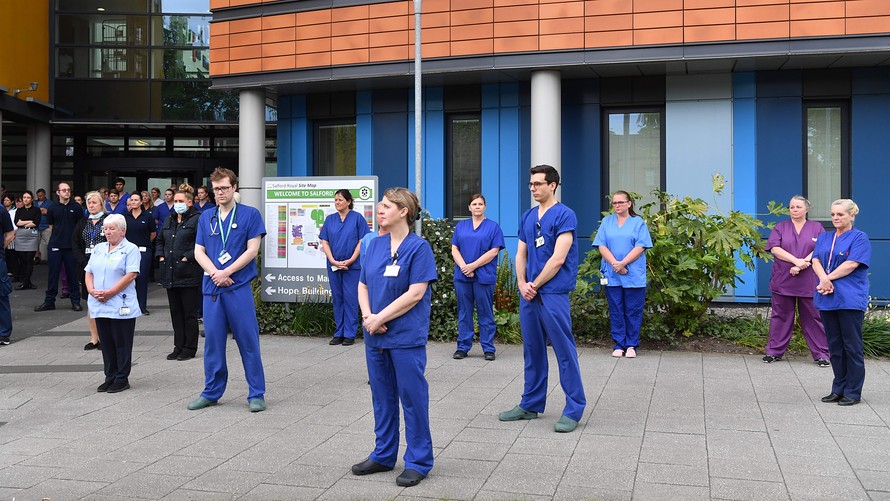 Getty Images
NHS staff pause Tuesday for a minute's silence outside Salford Royal Hospital in Salford, near Manchester, to honor key workers, including those from the National Health Service, and health- and social-care workers, who have died during the coronavirus outbreak.

Britain’s death toll from the coronavirus disease COVID-19 has risen to 26,097 after the government started including deaths in care homes and the wider community for the first time.

Previously, the government had only counted people who had died in hospitals after testing positive for coronavirus.

In the first statement since changing the way figures are produced, Public Health England said the total number of deaths included an additional 3,811 deaths since the start of the pandemic, 17% higher than previous data showed.

Of these, around 70% were outside hospital settings, while around 30% were in hospital.

The new numbers mean the U.K’s death toll is higher than France’s or Spain’s.

Speaking at the daily Downing Street briefing, Britain’s foreign secretary, Dominic Raab, emphasized that the latest figure for coronavirus deaths did not mean there had been a “sudden surge” in deaths. The retrospectively tabulated COVID-19 deaths were spread over the period from March 2 to April 28.

The number includes 765 deaths reported in the 24 hours ending at 5 p.m. on Tuesday. Only people who died after testing positive for coronavirus are included in the new total.

The jump in the total deaths will increase pressure on a government facing criticism for failing to protect the staff and elderly residents of nursing, or care, homes and too slow to impose a lockdown. Raab, deputized to act in Prime Minister Boris Johnson’s stead during the latter’s convalescence from his own COVID-19 infection, warned of the dangers of lifting lockdown restrictions prematurely, saying, “We mustn’t gamble away the sacrifices and the progress that we have made.”

Data released by the Office for National Statistics on Tuesday showed that the number of care-home deaths linked to coronavirus has risen sharply. The Care Quality Commission recorded 4,343 deaths of care-home residents in England between April 10 and April 24, the ONS said.

Raab said the U.K. now has capacity to conduct more than 73,000 tests for the virus per day.

As of Tuesday, 52,429 coronavirus tests had taken place, still short of the government’s target of carrying out 100,000 tests per day by the end of April.