WASHINGTON (MarketWatch) — The number of Americans who filed requests for unemployment insurance last week hovered near a four-month high, defying expectations that applications would begin to recede after a recent spike. 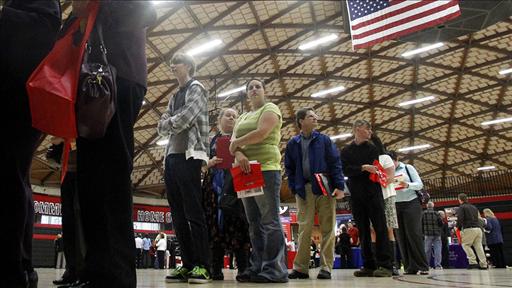 Claims from two weeks ago were revised up to 388,000 from an initial reading of 380,000. It was the second straight time claims were revised higher by an unusually large amount.

The higher level of claims, along with report showing slower growth among manufacturers, undercut U.S. stocks in Thursday trades. The Dow Jones industrial average was down almost 30 points in recent action.

Economists surveyed by MarketWatch had projected claims would fall to 374,000 in the latest week. The level of claims is a rough gauge of whether layoffs are rising or falling.

The weekly claims data is often hard to decipher in April because of the Easter holiday and spring break, when many school workers such as bus drivers and cafeteria workers are eligible to receive temporary benefits.

Yet the uptick in claims, which touched a four-year low in mid-February, is sharp enough to spark concerns about whether the labor market is losing steam again.

“Initial claims have been appreciably above our forecasts for two weeks and a failure over the next couple of weeks of initial claims to move back toward levels seen earlier this year would make us a little uneasy about our expectations for continued labor market improvement,” said John Ryding of RDQ Economics.

Most economists expect claims to resume a downward drift in upcoming months, but they are watching to see if slower growth in China and a European downturn start to take a bite out of U.S. hiring. A disappointing March employment report has put Wall Street on guard.

Some economists also question the accuracy of the government’s method for seasonally adjusting the data, which is supplied to the Labor Department by the individual states

The average of new claims over the past four weeks, meanwhile, rose by 5,500 to 374,750 — the highest level since late January. The four-week average reduces seasonal volatility in the weekly data and is seen as a more accurate barometer of labor-market trends,

Also Thursday, the Labor Department said continuing claims increased by 26,000 to a seasonally adjusted 3.3 million in the week ended April 7. It was the first increase in six weeks.

About 6.77 million people received some kind of state or federal benefit in the week ended March 31, down 187,807 from the prior week. Total claims are reported with a two-week lag.

In a separate report Thursday, the Philadelphia Federal Reserve said its survey of manufacturing executives fell to 8.5 in April from 12.5 in March. Although readings above zero indicate growth, not contraction, it was the first decline in six months. Read report on Philly Fed.

Another report showed a decline in the sale of existing homes in March, though the leading economic index rose. Read about home sales here and leading indicators here.