U.S. attorney for SDNY ousted by Trump and Barr to be interviewed by House panel

As U.S. attorney for the Southern District of New York, Geoffrey Berman led investigations into allies of President Donald Trump

WASHINGTON (AP) — The ousted former U.S. attorney for Manhattan will sit down with the House Judiciary Committee next week for a closed-door interview as the panel investigates politicization in the Justice Department.

Geoffrey Berman, the former U.S. attorney for the Southern District of New York who led investigations into allies of President Donald Trump, will appear in person for the transcribed interview July 9, according to a person familiar with the meeting who requested anonymity because it hasn’t yet been announced. The committee plans to publicly release the transcript.

Berman left his job last month after an extraordinary standoff in which he refused to resign until Trump himself fired him. Attorney General William Barr had attempted to force him to resign under pressure, but he refused to go.

Justice officials said Berman’s investigations would remain undisturbed, but Democrats on Capitol Hill have accused Barr of politicizing the agency and acting more like Trump’s personal lawyer than the country’s chief law enforcement officer. The Judiciary Committee is investigating the politicization and is scheduled to hear from Barr himself at the end of the month.

House Judiciary Committee Chairman Jerrold Nadler, D-N.Y., said last week that “the effort to remove Mr. Berman is part of a clear and dangerous pattern of conduct that began when Mr. Barr took office and continues to this day.”

Among the most high profile investigations Berman oversaw was into the business dealings of Rudy Giuliani, Trump’s personal lawyer. The Southern District has also prosecuted a number of Trump associates, including Trump’s former personal lawyer and fixer Michael Cohen, who served a prison sentence for lying to Congress and campaign finance crimes.

Berman has overseen the prosecution of two Florida businessmen, Lev Parnas and Igor Fruman, who were associates of Giuliani and tied to the Ukraine impeachment investigation. The men were charged in October with federal campaign finance violations, including hiding the origin of a $325,000 donation to a group supporting Trump’s reelection. 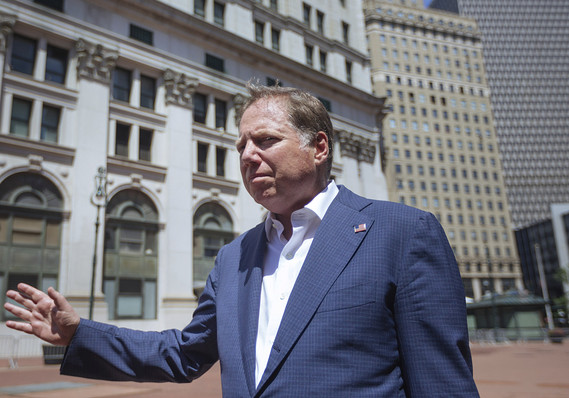 Associated Press
Geoffrey Berman, United States attorney for the Southern District of New York, arrives at his office on Saturday, June 20, which turned out to be his last day on the job as a standoff with Attorney General William Barr came to a head.

But Sen. Lindsey Graham, R-S.C., the chairman of the Senate Judiciary Committee and a close Trump ally, said he was unlikely to proceed with Clayton’s nomination unless New York’s senators, Democrats Chuck Schumer and Kirsten Gillibrand, gave their consent to the pick. They have both said that they will not.