U.S. case tally climbs to 23 million — or a quarter of the global tally — amid surge in new infections

‘We are tragically losing more than 1,300 people a week to this disease,’ says head of hard-hit Los Angeles County Public Health Department 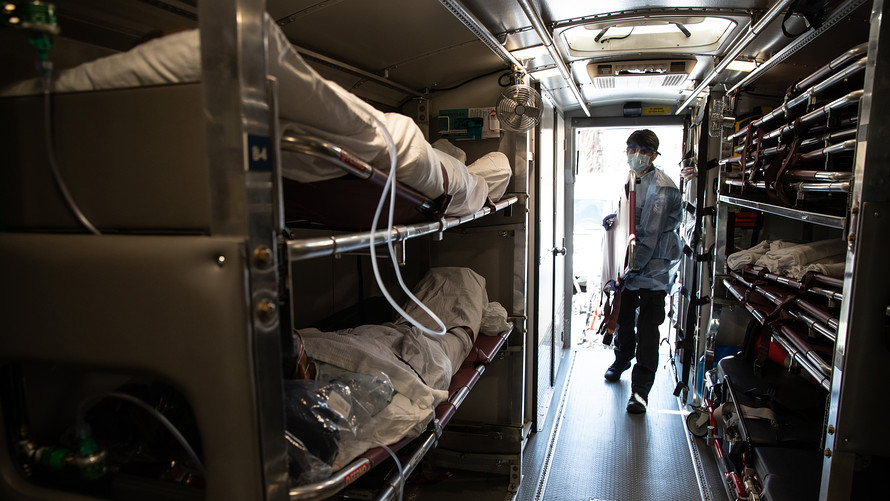 The global confirmed case tally for the coronavirus-borne illness COVID-19 climbed above 92 million on Thursday, with the U.S. accounting for more than 23 million of those infections, as the latest economic data showed the grave toll the pandemic was having on the labor market.

The number of Americans who applied for jobless benefits in the latest week soared to a five-month high of nearly 1 million as more workers lost their jobs to virus-related closures and restrictions.

President-elect Joe Biden is due to speak in Wilmington, Del. later Thursday to outline a spending package that is expected to include more direct payments to American families, along with funding for states and localities that are struggling to manage the vaccine program.

Incumbent President Donald Trump has left it to states to administer the program, meaning that stressed state health departments, which have already had to deal with testing, contact tracing, public information campaigns and deciding when or whether schools or businesses should be open or closed, are now tasked with handling the biggest public health effort in decades.

The Centers for Disease Control and Prevention’s vaccine tracker is showing that as of 9 a.m. ET Wednesday, just 10.3 million Americans had been vaccinated, far below the 20 million that was promised by end-December. Just 29.3 million doses have been distributed, since the first, much-ballyhooed emergency use authorizations were granted to the vaccines developed by Pfizer Inc. (NYS:PFE)  and German partner BioNTech SE (NAS:BNTX) , and a separate one developed by Moderna Inc. (NAS:MRNA) Both vaccines are two-dose regimens, which means the 29.3 million deliveries will only cover half that number of people.

Weekly deaths in Maricopa County, Arizona and in Los Angeles and Fresno Counties in California have set records, the New York Times reported. COVID-19 is claiming a life in Los Angeles County every eight minutes, according to the Public Health Department. Dr. Barbara Ferrer said COVID-19 outbreaks are growing at workplaces, and urged workers to adhere to public safety measures, such as washing hands frequently, socially distancing and wearing a face mask in public.

“We are tragically losing more than 1,300 people a week to this disease,” she said. “You or the person right next to you stand a very good chance of having the coronavirus and you many not know it, but as a carrier, you risk the health of many others. Your infection could lead to 20 infections in just a matter of a couple of days and someone along that path of transmission could die from it.”

Experts are concerned that the latest surges are being exacerbated by new variants of the virus, including ones that were first detected in the U.K., South Africa and Brazil, that are understood to be up to 70% more infectious that the original virus.

Researchers in Ohio said Wednesday that they have discovered two new variants that they believe originated in the U.S., which has not conducted as much genome sequencing as other countries. The new variant became the dominant one in Columbus, Ohio over a three-week period from late December into January, the researchers based at the Ohio State University Wexner Medical Center and College of Medicine said in a statement.

Their findings are for now under review for publication in BioRxiv as a preprint and have not yet been peer-reviewed.

“This new Columbus strain has the same genetic backbone as earlier cases we’ve studied, but these three mutations represent a significant evolution,” said study leader Dr. Dan Jones, vice chair of the division of molecular pathology. “We know this shift didn’t come from the U.K. or South African branches of the virus.”

For now, the researchers have no data to suggest the new variants will not respond to the vaccines that are being deployed across the U.S.

“It’s important that we don’t overreact to this new variant until we obtain additional data,” said Peter Mohler, a co-author of the study and chief scientific officer at the Ohio State Wexner Medical Center and vice dean for research at the College of Medicine. “We need to understand the impact of mutations on transmission of the virus, the prevalence of the strain in the population and whether it has a more significant impact on human health.

• A global team of researchers has arrived in the Chinese city of Wuhan, where the coronavirus pandemic was first detected, to conduct a politically sensitive investigation into its origins amid uncertainty about whether Beijing might try to prevent embarrassing discoveries, the Associated Press reported. The 10-member team sent by the World Health Organization was approved by President Xi Jinping’s government after months of diplomatic wrangling that prompted an unusual public complaint by the head of the WHO. A government spokesman said this week they will “exchange views” with Chinese scientists but gave no indication whether they would be allowed to gather evidence.

• People who have had COVID-19 are likely to be protected from reinfection for at least five months, a preliminary study of health care workers in the U.K. has found, MarketWatch’s Lina Saigol and Callum Keown reported. But experts cautioned those with immunity may still carry the virus in their nose and throat and risk transmitting it to others. Government agency Public Health England’s SIREN study, published on Thursday, hasn’t yet been peer-reviewed. Between June and November 2020, scientists detected 44 potential reinfections — two ‘probable’ and 42 ‘possible’ reinfections — out of 6,614 participants who had tested positive for antibodies. This represents an 83% rate of protection from reinfection, similar to the level of protection given from the COVID-19 vaccines currently being rolled out.

• A study published in the New England Journal of Medicine showed that Johnson & Johnson’s (NYS:JNJ)  COVID-19 vaccine candidate generated neutralizing antibody titers in 100% of roughly 800 adult participants younger than 55 years old by day 57, MarketWatch’s Jaimy Lee reported. “In addition, during 71 days of follow-up after the first dose, antibody titers further increased and stabilized, which suggests durability of the Ad26.COV2.S-elicited immune response,” the researchers wrote in the NEJM. The company’s experimental COVID-19 vaccine candidate is a single-dose vaccine, though the Phase 1/2 trial also includes a cohort of participants who receives two doses. It is also currently being tested in a Phase 3 clinical trial. J&J said it plans to share additional data from this trial about the immune response in adults older than 55 later this month, and it also expects to release top-line data from the Phase 3 trial sometime in January.

• Lebanon is planning one of the strictest lockdowns of the pandemic starting Thursday, with an 11-day nationwide shutdown and 24-hour curfew, the Guardian reported. Residents must request special permission to leave the house and supermarkets are closed to the public and only allowed to deliver. The tough measures came after the country’s hospitals ran out of beds and daily infections hit a new high of 5,440 cases last week. Lebanon has a population of nearly six million.

• The German economy contracted by 5% in 2020 to mark its worst performance since the 2008 financial crisis, broadcaster Deutsche Welle reported. But the numbers published by Germany’s Federal Statistical Office (Destatis) showed the economy fared relatively well compared with some other European nations, thanks in part to the country’s resilient manufacturing base. The drop in gross domestic product (GDP) was also smaller than analysts had predicted and less severe than the record contraction of -5.7% in 2009 during the global financial crisis.

The number of confirmed cases of COVID-19 worldwide climbed above 92.46 million on Thursday, according to data aggregated by Johns Hopkins University, and the death toll rose above 1.98 million. About 51 million people have recovered from COVID-19.

The U.S. continues to lead the world by cases, at 23 million, or a quarter of the global tally, and deaths, at 386,577, or about a fifth of the global total. The U.S. has more than double the country with the next biggest case load, India, which has 10.5 million cases and is third in deaths at 151,727.

China, where the virus was first discovered late last year, has had 97,324 confirmed cases and 4,796 deaths, according to its official numbers.

The number of Americans who applied for jobless benefits soared in early January to a five-month high of nearly 1 million as more workers lost their jobs due to business closures and restrictions to combat the winter resurgence of the coronavirus pandemic, MarketWatch’s Jeffry Bartash reported.

Initial jobless claims filed traditionally through the states leapt by 181,000 to a seasonally adjusted 965,000 in the seven days ended Jan. 9, the government said Thursday. It was the highest level since August.

Another 284,470 applications were filed through a temporary federal-relief program.

Adding up new state and federal claims, the government received 1.44 million applications last week, based on actual or unadjusted figures. Combined claims have yet to drop below 1 million a week since last spring.

“Another week of bad economic data underscores the fact that the economy is weak and the job market is getting worse,” said Chris Zaccarelli, chief investment officer at Independent Advisor Alliance.

Separately, the cost of imported goods rose 0.9% in December, matching the biggest increase in five months, largely because of higher prices for oil and industrial supplies.

The import price index rose for the seventh time in eight months, but inflation is still very low. Import prices, for example, have actually declined 0.3% in the past 12 months.

If fuel is excluded, import prices moved up a smaller 0.4% last month. Over the past year import prices minus fuel have risen a moderate 1.9%.U.S. export prices rose 0.6% in December.

Read now: Chinese exports shot to a record high in 2020 as the world economy sank