Yet unemployment rate falls to nearly 10-year low of 4.5% 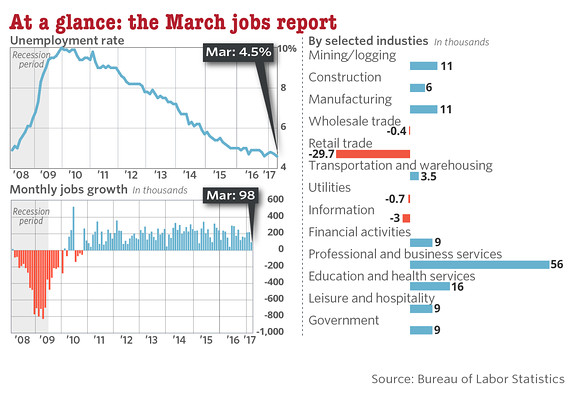 The U.S. created just 98,000 new jobs in March to mark the smallest gain in almost a year, a sign the labor market is not quite as strong as big hiring gains earlier in 2017 suggested.

The unemployment rate, meanwhile, fell to 4.5% from 4.7% and touched a nearly 10-year low despite the slowdown in hiring.

U.S. stocks /zigman2/quotes/210598065/realtime DJIA -0.88%  ended the session pretty much where they started as investors sifted through the March employment report.

The U.S. had added more than 200,000 jobs in January and February, but hiring in weather-sensitive industries such as construction was helped by unusually high temperatures in the dead of winter.

Many economists were skeptical the recent pace of job creation was sustainable after a six-year hiring boom that chopped the unemployment rate in half and ignited growing complaints among companies about a shortage of skilled workers to fill open jobs.

As a result, economists polled by MarketWatch had estimated the number of new jobs created in March would taper off to 185,000 in the third month of Donald Trump’s young presidency. Instead the decline was even steeper, speared by plunging employment in a beleaguered retail industry.

Added economist Harm Bandholz of UniCredit: “Most of this is weather related and correct for exaggerated strengths seen earlier in the year.”

President Trump has repeatedly said his focus is “jobs, jobs, jobs” and he’s laid out a set of pro-business policies to boost the economy, but by most measures the labor market is already the healthiest it’s been in a decade.

Economists say it might be impossible to maintain a hiring pace above 200,000, at least for any length of time.

“It’s important to keep in mind that job gains are supposed to be slowing as the labor market tightens and it gets tougher for firms to find acceptable candidates,” said Stephen Stanley, chief economist of Amherst Pierpont Securities.