Americans now have the highest credit-card debt in U.S. history

U.S. households collectively have more than $1 trillion in credit-card debt 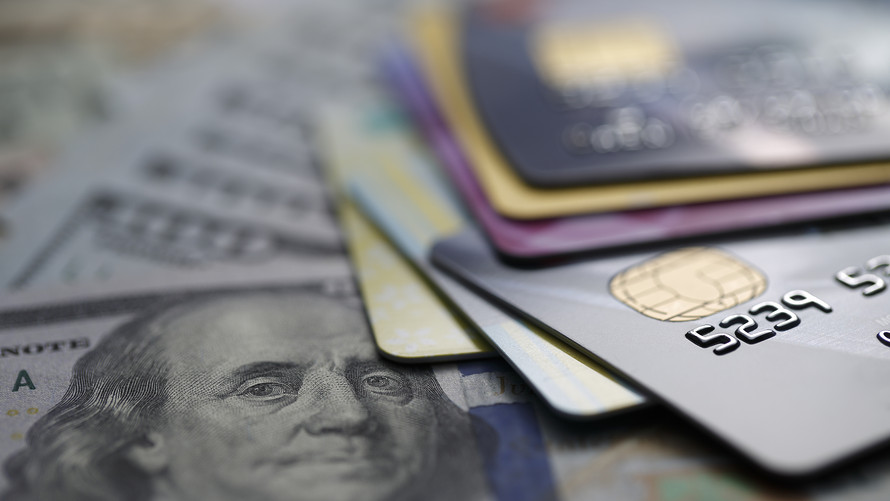 “This record should serve as a wake-up call to Americans to focus on their credit card debt,” said Matt Schulz, a senior industry analyst at CreditCards.com, a credit card website. “Even if you feel your debt is manageable right now, know that you could be one unexpected emergency away from real trouble.”

Revolving credit had been growing at an annual growth rate of 4.9% . One reason: More consumers are getting access to credit cards backed by major banks and issuers in recent months. More than 171 million consumers had access to those cards in the first quarter of 2017, the highest number that has had access since 2005, when about $162.5 million people had access.

For the first time since the Great Recession, lenders have given more consumers with sub-prime, or below average, credit scores, access to credit cards, but they are giving them lower spending limits, according to the credit reporting agency TransUnion /zigman2/quotes/209192458/composite TRU -1.82%  .

This isn’t the first debt milestone Americans have hit recently. The Federal Reserve announced in April that the U.S. had $1 trillion in credit-card debt. (Consumers hit that number previously in the fourth quarter of 2016, but had eased on their use of revolving credit during January 2017. The Fed announcement showed revolving consumer credit hit more than $1 trillion once again in February 2017 and has continued to climb.)

This year, total household debt — including housing, auto loans and student-loan debt — in the U.S. also surpassed the 2008 peak. While the debt level is similar to 2008, the things Americans are buying on credit have changed, as household incomes have increased in recent years, and housing prices and stock prices have improved.

Compared with 2008, fewer borrowers have housing-related debt and, instead, more have taken on auto and student loans.This is backed up by previous research: Student loans have made it harder for younger consumers to buy homes; plus, lower housing prices are also tied to higher student loan default rates.)

Here’s how the numbers stack up for indebted Americans in 2017: Housing-related debt is down nearly $1 trillion since the 2008 peak, but auto loan balances are $367 billion higher, and student loans are a whopping $671 billion higher, according to the Federal Reserve. 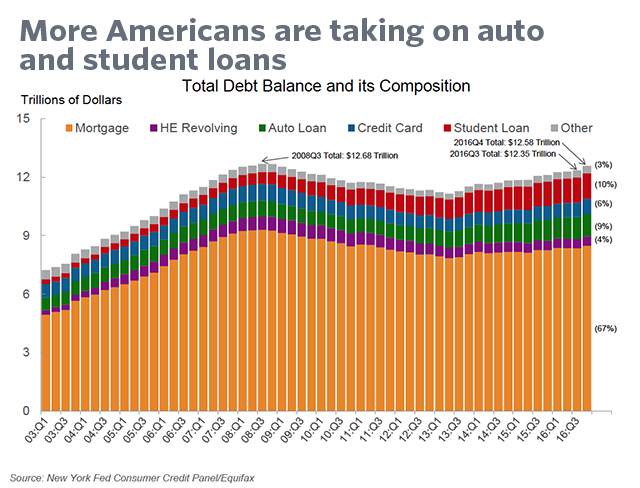 Previous Fed studies have shown Americans struggle with their auto debt, which often has high interest rates. The number of subprime auto loans that have fallen into delinquency hit their highest level since 2010 during December 2016. At that time, nearly 6 million people were at least 90 days late on their payments. That is similar consumer behavior to what was seen just before the 2007 - 2009 recession, experts said.

Nearly a quarter of the adults the Fed surveyed in 2016 said they or their spouse purchased or leased a new or used car or truck in the last year. About two-thirds of them took out a loan to do so. And 12% of those who used loans had a longer repayment period than the amount of time they even planned to own the vehicle.

Another trend: Older Americans are taking on a greater share of debt than in years past. Those ages 60 and older held 22.5% of total household debt in the fourth quarter of 2016, compared with 15.9% in 2008 and 12.6% in 2003. Although much of that debt is likely due to mortgages, it’s also possible they are shouldering more student loan debt than in the past, for their children and grandchildren. There were nearly 2 million borrowers between the ages of 50 and 64 who took on “Parent PLUS” loans, the loans the government offers parents, in 2015, up from about 1 million in 2005. Another 200,000 borrowers over the age of 65 also have them.

Credit card debt and auto loan debt balances for people ages 60 and older have also risen since 2008, whereas credit card debt for those 59 and younger has fallen. The Fed, when describing that phenomenon, said lending standards have tightened since the recession, and those who are older may also be more creditworthy.

Although that may make young Americans breathe a sigh of relief, it’s still potentially dangerous, as high levels of debt could mean older Americans don’t have enough money saved for retirement. Indeed, the average American couple has only $5,000 saved for retirement, and only a third of working Americans are saving money in an employer-sponsored or tax-deferred retirement account.

Lending to people who are unlikely to pay debts back can have disastrous effects, from keeping families in debt for years to ruining their credit scores, which makes it more difficult for them to borrow responsibly in the future.