Bloomberg
A worker welds metal components. American manufacturers are still expanding, but at a much slower pace compared with last year.

The numbers: U.S. manufacturers grew in June at the slowest pace in more than two years, hurt by trade tensions with China and Mexico and weak exports, a survey of executives found.

The Institute for Supply Management said its manufacturing index slipped to 51.7% in June from 52.1% in the prior month. 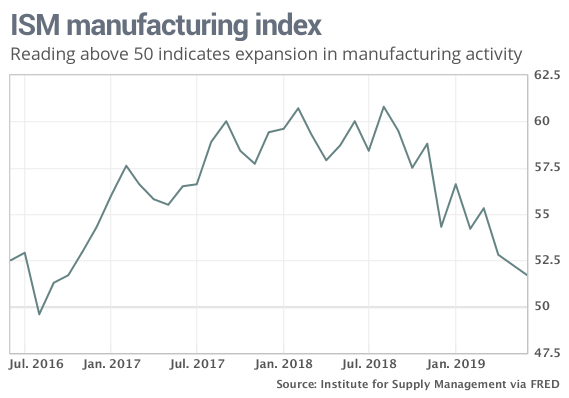 Readings over 50% indicate more companies are expanding instead of shrinking, but the index has fallen three months in a row and is well off recent highs.

The index hit a 14-year peak of 60.8% last August, but it began to decline after a U.S. trade dispute with China intensified and spurred a round of tariffs by both countries

What happened: Customer orders were basically flat in June. The ISM orders index slid 2.7 points to 50% — a point at which bookings are neither rising or falling. It was the lowest reading since December 2015.

The decline in new orders likely stems from the an impasse in trade talks with China that spurred the White House to announce a new round of tariffs, though Trump rescinded the order over the weekend after meeting with the Chinese leader.

Trump also briefly threatened to apply tariffs to all Mexican imports last month to pressure authorities to crack down on migrants trying to enter the U.S. via the southern border.

Although Trump later dropped its threat, the move caught businesses by surprise. Many executives complained about the White House trade strategy.

“China tariffs and pending Mexico tariffs are wreaking havoc with supply chains and costs. The situation is crazy, driving a huge amount of work [and] costs, as well as potential supply disruptions,” said an executive at a computer maker.

“Tariffs continue to adversely impact decisions and forecasting. Our increasing fear is that current trends will weaken the global economy, influencing our ability to grow in 2020 and beyond,” said an executive at a company that makes fabricated-metal parts.

A few positives: Production rose and employment did, too.

The index is compiled from a survey of executives who order raw materials and other supplies for their companies. The gauge tends to rise or fall in tandem with the health of the economy.

Read: Robots are coming for your jobs — Oregon, Louisiana, Texas have most to lose

The big picture: The U.S. economy on Monday set a record for longest expansion ever — it’s going on 121 months — but it’s not nearly as strong as it was one year ago. The main culprit: The ongoing trade war with China that’s disrupted the global economy.

The U.S. and China agreed over the weekend to delay another round of tariffs as the continue to negotiate, but as long as the tensions remain, businesses will be caught in the middle.

What they are saying?: “Relations with both China and Mexico have improved since this survey data was collected, so next month should be better,” said Thomas Simons, senior money market economist at Jefferies LLC.

“If the White House is able to forge a solid trade deal with China, both investment spending and manufacturing activity will again improve,” he said. “However, the longer trade tensions persist and accelerate, the more severe will be the consequences for the U.S. economy.”