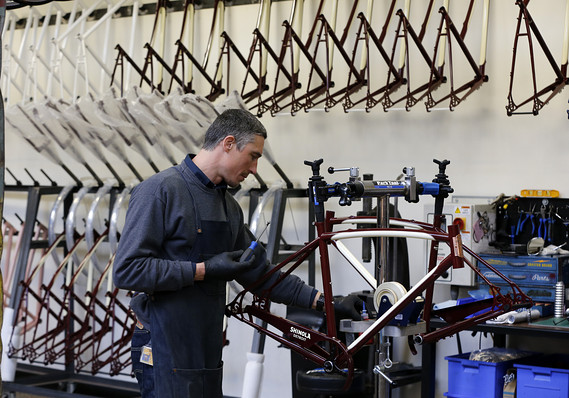 Enlarge Image
A worker assembles a bike at the Shinola store in Detroit, Michigan.

The numbers: American manufacturing recovered a bit in March after hitting a two-year low in the prior month.

The Institute for Supply Management said its manufacturing index rose to 55.3% last month from 54.2% in February. The latest reading, derived from a survey of executives, exceeded the MarketWatch forecast of 54.6%.

Another measure, the IHS Markit manufacturing purchasing managers index, fell to 52.4 vs. 53 in February, the lowest reading since June 2017.

Any number above 50% reflects a growing economy.

What happened: The index for new orders jumped 1.9 points to 57.4%, while production rose 1 point to 55.8%. Employment surged 5.2 points to 57.5%. Sixteen of the 18 U.S. manufacturing industries surveyed by ISM expanded in March.

Big picture: Manufacturing has downshifted since last fall. Any sign that factory activity is leveling off, perhaps positioning for a turnaround, would be welcome. The economy looked fairly weak in the first quarter, but Federal Reserve officials have stressed they expect a rebound in the current April-June quarter.

What are they saying: “There is nothing in the details of the data or the comments to make you think the expansion is going to come to an end anytime soon,” said Richard Moody. He added that U.S./China trade dispute did not dominate the comments from supply managers. “There is an expectation that sooner or later we will get a relatively benign outcome to the trade dispute and we can go back to worrying about being able to find workers and transportation,” Moody added.

Market reaction: The Dow Jones Industrial Average /zigman2/quotes/210598065/realtime DJIA -0.29%  picked up after the manufacturing data was released, along with construction and inventories reports. The index surged 329 points to close at 26,258. This was its best daily gain since Feb. 15.