U.S. pulls troops from Libya as fighting in capital intensifies

Country stands on precipice of civil war, battle for Tripoli continues with airstrikes 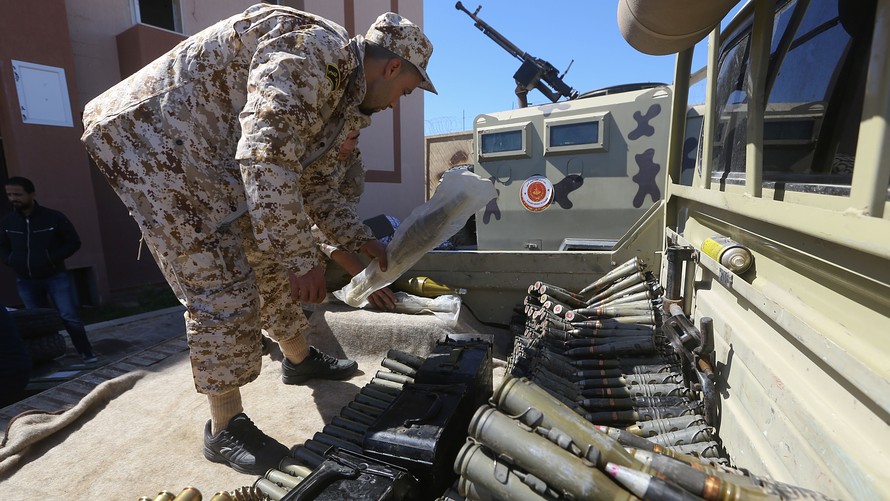 Getty Images
Fighters from a Misrata armed group loyal to the internationally recognized Libyan Government of National Accord (GNA) prepare their ammunition before heading to the frontline as battles against Forces of Libyan strongman Khalifa Haftar continue on the outskirts of the capital Tripoli on Monday.

The U.S. military said it pulled a small contingent of American forces from Libya as the country teetered on the brink of full-scale civil war, with fighting continuing around the capital Tripoli.

The evacuation is the latest turn in a troubled history of American military involvement in Libya, which has been in turmoil since the overthrow of Moammar Gadhafi in an armed uprising supported by North Atlantic Treaty Organization airstrikes in 2011. U.S. forces have also played a key role in uprooting Islamic State, which gained a foothold in Libya in the chaos that ensued after the Arab Spring.

Citing the ability of U.S. forces to “flex where required” in Libya, Col. Christopher Karns, a spokesman for U.S. Africa Command, confirmed the departure from Tripoli. “Security conditions in pockets of the country have declined,” Karns said, declining to provide details on where the contingent is headed. “It is important various terror affiliated groups, such as ISIS, don’t have an exact map of our whereabouts,” he said, referring to Islamic State.

According to the U.N., four civilians have been killed since the fighting flared up on April 4. In addition, 2,200 people have been displaced. A rogue Libyan military commander, Gen. Khalifa Haftar, ordered his forces to attack Tripoli on Thursday in an offensive against an internationally recognized government based in the capital. The fighting continued over the weekend as both sides launched airstrikes, each making use of the small number of military aircraft in their possession.

An expanded version of this report is at WSJ.com .

Shockingly good smartphones you can get for $350 or less