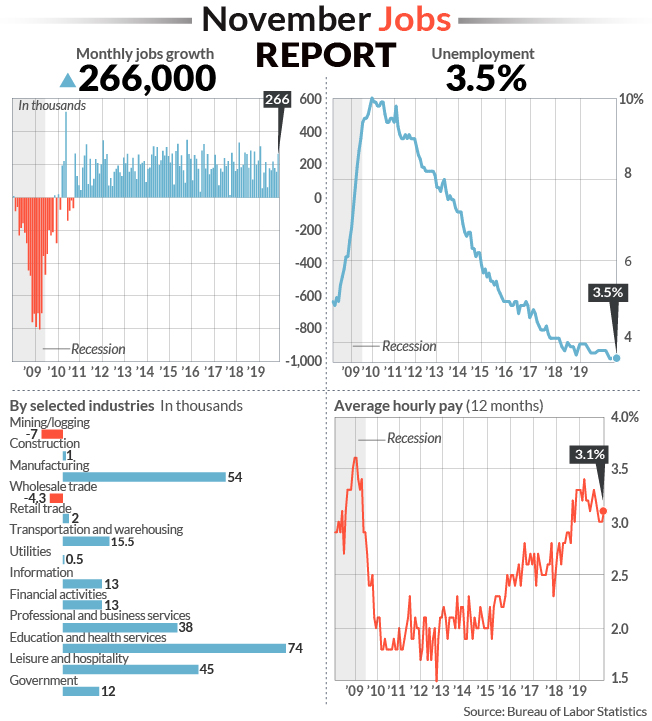 The numbers: The economy produced a robust 266,000 new jobs in November and the unemployment rate returned to a 50-year low, reflecting the resilience of the U.S. labor market.

The increase in employment — the biggest since January — was partly inflated by the return of nearly 50,000 striking auto workers at General Motors /zigman2/quotes/205226835/composite GM -1.85% . Yet it was still a surprisingly strong report. Economists surveyed by MarketWatch had predicted a more modest 180,000 gain.

Hiring was strong almost across the board, with health care, hospitality and professional occupations leading the way.

Employment in manufacturing jumped by 54,000, but almost all of the gains stemmed from General Motors /zigman2/quotes/205226835/composite GM -1.85%  employees returning to work after a month-long strike. Manufacturers have added virtually no jobs this year, hurt by a slowing global economy and by the U.S. trade war with China.

The amount of money the average worker earns, meanwhile, rose 7 cents to $28.29 an hour. The increase in pay in the past 12 months slowed to 3.1% from 3.2%, however, indicating that many of the newly created jobs are likely lower-paying ones.

Wage gains climbed steadily from 2014 until early this year before leveling out at just over 3% a year.

Adding to the positive tone of the November jobs report, the government revised up employment gains for October and September by a combined 41,000.

Over the past three months, the economy had added an average of 205,000 new jobs. That’s down from a 223,000 average in 2018, but still quite vigorous more than a decade into an economic recovery.

Read: Fed ‘super-glued’ to its seat until after the election, economists say after stellar jobs report