”So much of our economic hopes are dependent upon employment stabilizing and improving,” Lawrence Creatura, portfolio manager at Federated Investors, said of the weekly jobless-claims data. “It would be painfully discouraging to have this data continue to go in the wrong direction. … At this stage, this is just a symptom and not a disease.” 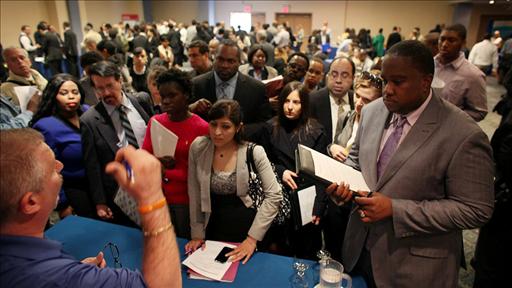 For every stock that rose, nearly three fell on the New York Stock Exchange, where almost 823 million shares traded; composite volume of 4.14 billion was the largest volume day since April 10 and topped the year-to-date average of 3.79 billion.

Volume of Nasdaq Stock Market-listed shares also picked up. The 1.98 billion shares trading hands was the largest since March 16 and topped the year-to-date average of 1.75 billion. 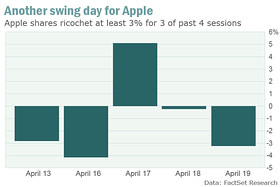 “Once again companies are surprising on the upside and generating quite a bit of cash,” said Owen Fitzpatrick, chief equities strategist at DWS Investments, part of Deutsche Bank Group, at an afternoon briefing in New York. Corporate earnings lately have included better-than-expected results from Bank of America Corp. (NYS:BAC) , Morgan Stanley (NYS:MS) and eBay Inc. (NAS:EBAY)

In Europe Thursday, Spanish and Italian bonds declined after Italy said costs related to servicing its debt would escalate this year and as yields rose at French and Spanish auctions.

“A lot of people already feel like the macro news in U.S. has been pretty good; we have a heartbeat now. The biggest concern is what can Europe can do to off all of this,” said Brad Thompson, chief investment officer at Stadion Money Management in Watkinsville, Ga.

U.S. economic reports painted a mixed picture. An April gauge of manufacturing activity in the Philadelphia region came in worse than expectations, as did first-time jobless claims. Read more about jobless-benefits claims.

Sales of previously owned homes fell last month for the third time in four, underscoring the ongoing struggles for the housing market. Read more about sales of existing homes.