Dow logs a 300-point gain as banks rally ahead of stress-test results, but rise in coronavirus cases remains a worry 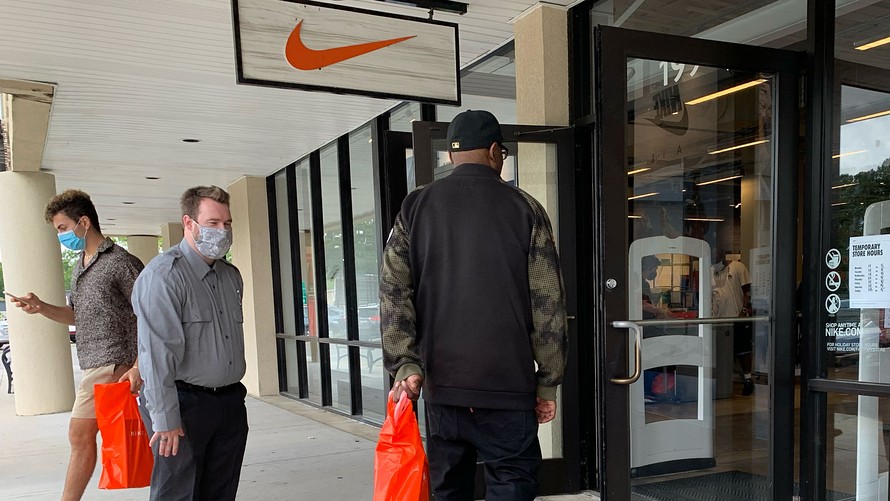 AFP/Getty Images
People social distance and stand in line to get into the Nike Factory store at Queenstown Outlets in Queenstown, Maryland

U.S. stocks closed solidly higher Thursday, recovering a chunk of Wednesday’s ugly loss, ahead of a key update of the banking sector from the Federal Reserve.

Investors have been struggling to balance the reality of the rise in the daily rate of new coronavirus cases against a marginal improvement in economic data and a rollback of red tape by U.S. financial regulators.

How are the benchmarks performing?

The stock market struggled to find its footing Thursday, after the biggest sell off in two weeks on Wednesday, but ultimately gained ground in the final half-hour of trade helped by financial sector stocks which have lagged in the rebound from the market lows seen in late March.

Combined with a late-session resurgence in technology names, ten of the S&P 500’s 11 sectors finished higher, with the exception of the utility sector, which closed down 1.2%.

Markets got a boost after the Federal Deposit Insurance Commission and Office of the Comptroller of the Currency said they are planning to loosen the restrictions imposed by the Volcker rule and allow banks to more easily make large investments into venture capital and similar funds. They will also be able avoid setting aside cash for derivatives trades between different affiliates of the same firm, potentially freeing up billions of dollars in capital for the industry, according to the Wall Street Journal.

The Federal Reserve earlier said banks entered the coronavirus crisis in a strong position, but analysts believe that the length of the pandemic could erode the balance sheets of some institutions as credit losses mount. The Fed will release the results of its bank stress tests later Thursday but has asked banks to refrain from disclosing the results publicly until after the market closes on June 29.

Investors spent much of the day parsing slowly improving economic data against news of surging numbers of COVID-19 cases in some U.S. states.

In the third and final reading of first-quarter U.S. gross domestic product, the official scorecard of the health of the U.S. economy, the government confirmed that the economy contracted at an annualized pace of 5%. And a report on orders for long-lasting, or durable, goods, showed they rose 15.8% in May.

And on Thursday Texas announced that it was freezing its plan to allow businesses to reopen as more than 20 million people in the U.S. may have been infected, according to the Centers for Disease Control and Prevention. Apple /zigman2/quotes/202934861/composite AAPL -2.09%   also announced it was closing more stores after announcing the temporary closure of seven stores in Houston pon Wednesday.