NEW YORK (MarketWatch) — U.S. stocks rallied on Thursday, with the S&P 500 index marking its best day in five months, bolstered by upbeat economic data and a late-session report in The Wall Street Journal that eased worries about the Federal Reserve’s monetary policy.

U.S. stock indexes were already surging as positive economic reports overrode concern about the Japanese market, but rose to session highs in the wake of the Journal piece.

“There’s a Wall Street Journal report about the Fed not likely to do anything at this meeting,” said Dan Greenhaus, chief global strategist at BTIG LLC. A story written by Journal reporter Jon Hilsenrath, considered an influential voice on central-bank policy, said that Federal Reserve Chairman Ben Bernanke would likely reiterate the Fed expects a “considerable” amount of time to pass between ending the central bank’s bond-buying program and raising short-term rates. The Federal Open Market Committee will issue a monetary-policy decision next week.

“We had a decent jobless-claims number and retail sales were pretty solid,” said Matt Kaufler, portfolio manager at Federated Investors. “Both are very encouraging signs of the ongoing mending of the U.S. economy, which helped negate concerns about what happened in Japan overnight.”

The Labor Department said applications for unemployment benefits fell by 12,000 to 334,000 last week. The four-week moving average declined to 345,250 last week from 352,500. Separate numbers from the Commerce Department had retail sales climbing 0.6% in May, the largest jump in three months, and coming after a 0.1% rise in April. 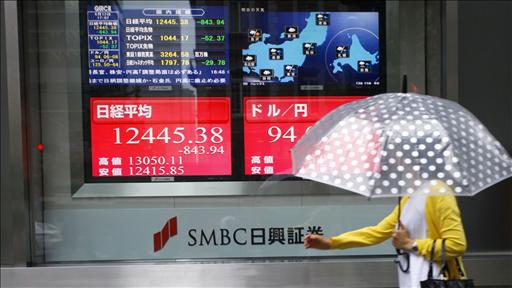 After another drop in the Nikkei, have the central banks stopped communicating with the markets? Economics editor David Wessel discusses.

A day after boosting its quarterly dividend by 8 cents to 60 cents a share, heavy-equipment maker Caterpillar Inc. /zigman2/quotes/203434128/composite CAT -2.68%   led blue-chip gains, which included 26 of the index’s 30 components.

“It appears that the global markets are feeling the reaction of global traders suddenly trying to unwind global carry-trade positions in light of the fact that the currency used to put on the trade, the yen, has suddenly moved up to a 10-week high versus the dollar,” Fred Dickson, chief investment strategist at Davidson Companies, said in emailed comments.

The direction of Fed policy, and specifically when the central bank may scale back its bond purchases, has been a primary concern for investors in recent weeks.

“The market’s in a bit of a tug of war in that you have this fear on any given day of the new buzz word, or tapering, by the Fed, and will the market be able to ride without training wheels, if you will, or the assistance of the Fed,” said Kaufler.

And then there’s “spillover concern from the Nikkei, fueled by their own monetary policy,” added Kaufler of Japan, where the Nikkei Stock Average /zigman2/quotes/210597971/delayed JP:NIK -1.53% plunged 6.4% Thursday, pushing it back into bear-market territory.

Among notable U.S. stock moves Thursday, Williams Cos. /zigman2/quotes/205467183/composite WMB -0.33%  fell 1% after the pipeline company said a blast occurred Thursday morning at a facility in Geismar, La. At least two people died and nearly 50 were reportedly injured in the chemical-plant explosion.

Safeway Inc.   jumped 7.4% after the grocer said it would sell its stores in Canada and use the proceeds to pay down debt and repurchase stock.