Six weeks ago, I highlighted four oil exploration and production companies operating primarily in the Bakken shale play that were all potential acquisition targets. Three of these companies are up a bit, but have become rangebound recently due to a spate of higher-than-anticipated operating expenses. Here are the charts of the four companies: 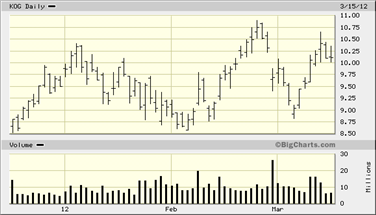 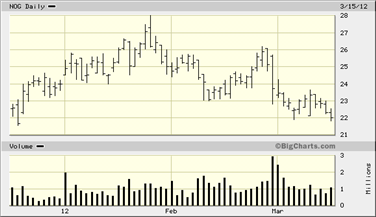 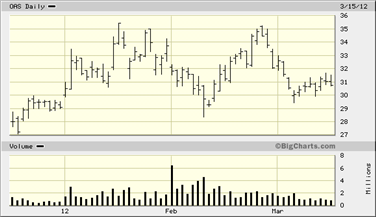 In looking at the charts, Kodiak looks like the most likely to break out. The company did experience higher-than-expected expenses in the most recent quarterly report, but a portion of that can be attributed to being ahead of schedule in drilling due to mild weather in December. The company is trading at about a forward P/E of 8, and if it ramps drilling a bit faster than lowered expectations, it could see its share price surge.

Oasis is looking pretty good technically, too, potentially coming out of a pivot up, off a double bottom. It reported good earnings and outlooks a couple of weeks ago and is ramping revenue quickly. With very experienced management, it is hard to see this company not doing well.

Triangle's chart is ambiguous at this point in my opinion, but I think the company might be the most ripe for a takeover based upon its size and other factors. If they get their new wells into operation before the stated summer anticipation dates, these shares could jump.

Given the mild winter and clear focus on the North Dakota part of their portfolio over the less-proven Montana portion, I think it is likely the new wells produce sooner than expected or at least on time. The company is weirdly debt-free to boot.

Northern is the weakest in the bunch technically, trending down. Catching this gently falling knife might produce big gains if done well. However, given the volatility of oil stocks, you could get cut as well. Given Northern's partnership strategy, I don't see their weakness lasting long. The question is how to take a position.

I am using a basket approach to these companies by owning some stock and holding some bullish and neutral option positions .

The option strategy I am using is fairly simple. I am selling puts and buying calls with the collected premiums. My downside is that I will potentially have to buy some stock in companies that I like at a little less net cost than today's price later in the year. My upside is that I capture amplified gains if there is a surge in these particular oil stocks.

Kodiak puts with a $10 strike price (about today's share price) have a bid of $1.45. Selling those generates $1.45 per share in premium. An investor’s obligation is that you may have to buy the stock at $10 between now and the third Friday in September.

Using the $1.05 of the put premium collected to buy June $10 calls, an investor would still have a net .40 per share in their account and get the upside of the June calls.

For example, if Kodiak rises to $15 between now and June, the investor will be able to sell those calls for $5 (plus any time value that is left), far in excess of the 50% gain if the stock were simply bought. If the stock is under $10 come September, an investor could buy the stock for a net cost of $9.60, which is the $10 strike price minus the 40¢ premium held.

There are similar strategies using the other Bakken stocks mentioned.

I am also using a sell-puts/buy-calls strategy across two stocks. I have sold some puts on Northern Oil and Gas and used the premium to buy calls on Oasis. I make a few dimes on the deal and get the short-term upside of Oasis which might be developing momentum, in addition to its fundamental positives. If there is a setback in these stocks, I might end up having to buy Northern Oil and Gas for a little cheaper net cost than today's price, which is fine since I like it in for the long run.

In using the sell puts and buy calls strategy, there is also the possibility that all of the options expire unexcercised, in which case the gain is small. While not sexy, it is better than a sharp stick in the eye. If the options all expire, rinse and repeat is what I generally do.

I know this seems fairly complex to non-option traders, but learning basic option strategies can be a great way to get more upside with the same downside as buying stocks outright. With the companies discussed, getting that extra short run upside could result in big gains for any number of reasons, such as war in Iran, an oil disruption somewhere else in the world, stronger than expected economic growth numbers, acquisition or revenue and/or earnings beats by the companies which get ahead on their drilling due to good weather.