Using volatility and Fed data to call the next trend

We all are familiar with the term quantitative easing (QE). It is an unconventional monetary policy of stimulating the economy by massive injections of liquidity. The U.S. Federal Reserve, followed by other countries' central banks, began it in December 2008 to help stimulate the economy after the colossal financial collapse earlier in 2008. 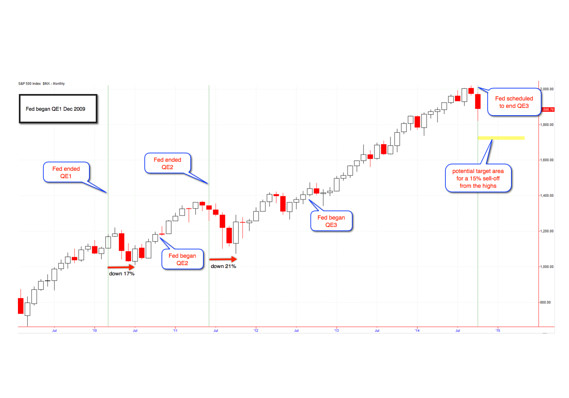 The Fed introduced QE3 in September 2012, and it is scheduled to end at the end of this month. A selloff began last month in anticipation of the end of QE3.

The market tends to drop over 15% after QE ends. If the current selloff follows this pattern, the S&P 500 will fall below 1715. Let's add volatility measurements to find what we may expect in the months ahead.

Markets rise on lower volatility and fall on higher volatility. If we think of volatility as anxiety, market participants are much more anxious when the market falls than when it rises. 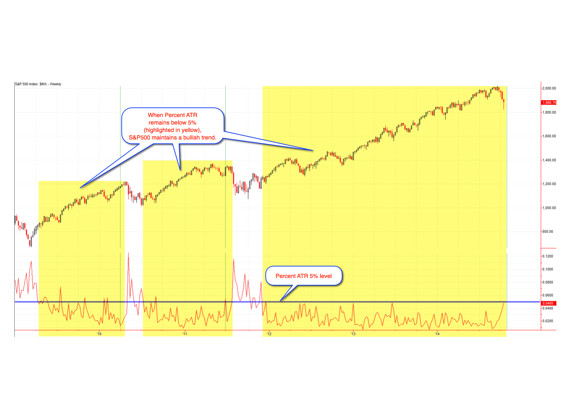 In the chart above, we see that the market rises when volatility, measured by Percent ATR, remains below 5%, but falls when Percent ATR rises above 5%.

Whenever the Fed ends a QE and volatility rises above 5%, we can expect a correction of over 15%. QE3 is scheduled to end this month. Volatility is nearing the 5% level. If the Fed does end QE3, market participants' anxiety is likely to raise volatility above 5%, pushing the current selloff to lower levels.

If, on the other hand, market participants are not as nervous, Percent ATR will remain below 5%, and the market will be positioned to form a base for the next bullish phase.

Combining QE news with volatility measurements will allow to anticipate which outcome is more likely and trade accordingly. We watch these numbers very closely and update them in SpikeTrade.com whenever they reach or cross important levels .