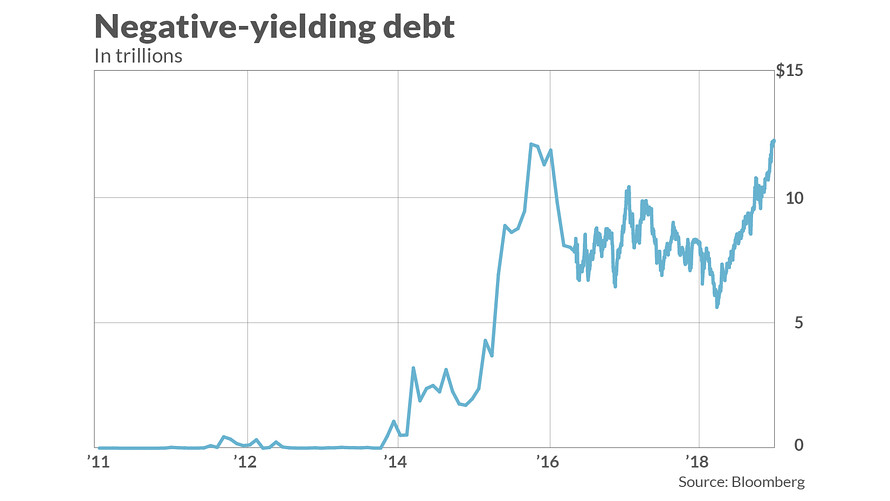 The universe of government bonds with negative-yields continues to swell.

The total amount of debt with yields below zero touched a record of $13 trillion, according to Bloomberg data. The ballooning value of subzero-yielding debt reflects how global bond markets continue to attract inflows from jittery investors who see few ports of shelter as a U.S.-China trade war threatens to roil international growth.

After the 2008 global financial crisis, central banks pulled out all the stops to revive the global economy. In particular, analysts say the use of ultra-low interest rates and bond-buying programs by the world’s major central banks including the ECB, BOJ and the Federal Reserve have helped push long-term government bond yields to record lows and sometimes even negative levels.

That power was on full display again on Tuesday when ECB President Mario Draghi said he could loosen monetary policy further if inflation refused to budge higher. Soon after, eurozone bond markets surged and yields plunged.

The Federal Reserve followed suit on Wednesday, with the U.S. central bank dropping the word “patience” from their policy statement. Close to half of the Fed’s rate-setting body projected two rate cuts by the end of this year.

A growing number of market participants now anticipate yields for government paper will remain at lower levels as aging demographics and rising debt loads weigh on long-term growth and inflation.

“Interest rates are generally going to be lower for longer, there’s not a lot of catalysts that we can think of for interest rates to move meaningfully higher,” Margaret Steinbach, a fixed-income specialist at Capital Group, told MarketWatch.