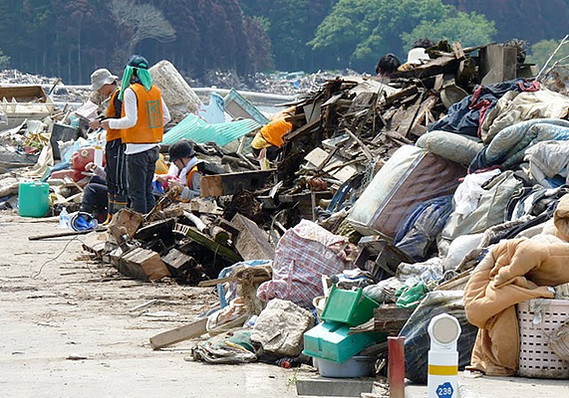 TOKYO (MarketWatch) — Four months after Japan’s disaster, individuals and small businesses still face the daunting task of cleaning up, and Japanese and global companies are supporting the volunteers who try to fill the gaps.

The March 11 quake and tsunami left more than 20,000 dead or missing. Bodies continue to turn up, but many likely washed out to sea. Some government estimates put the overall cost of rebuilding at 23 trillion yen ($293 billion) over the coming decade, and the hardest-hit regions will take years to recover.

The disaster galvanized an outpouring of support, with about ¥270 billion in domestic donations flooding into the Japanese Red Cross as of late July, and another ¥34 billion from around the world as of June. Even the women’s national soccer team got into the spirit on the way to its World Cup victory, displaying a banner thanking those who have aided their country. Read more about Japan's World Cup win.

The Japanese government has passed two extra budgets aimed at disaster relief, with a larger, third one still to come, but many in the disaster zone are still waiting for help. In the meantime, an estimated half-million volunteers have swarmed to the area — some on their own, and some with the support of their employers. 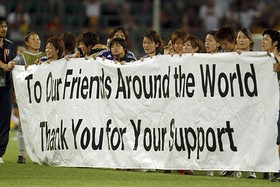 “The volunteers help companies like mine, as we work for the recovery of our businesses and our city,” said Motokazu Arakawa, chief executive officer of Arakawa Shichiei Shoten Co., a wholesaler of industrial gas in Miyagi Prefecture’s Ishinomaki. View a slide show of images from Ishinomaki: Scenes from Japan’s disaster recovery.

Ishinomaki had more than 162,000 residents before the disaster killed over 3,000 — the highest confirmed death toll for any Tohoku city. Nearly 3,000 are still missing, including some students from Okawa Elementary School, where 74 of 108 students and 10 of 13 teachers and staff were swept away.

Arakawa survived the massive wave by clinging to a girder at the top of his warehouse.

“If the water had risen just 20 centimeters higher, I wouldn’t be here now,” he said, as he sorted through mud-covered belongings in his family home adjacent to his business.

JAPAN: TALES OF THE RECONSTRUCTION

After the disaster, the first emergency food and drinking water Arakawa received weren’t from the government but from a nonprofit organization. Much of the debris on his property was cleared by volunteers from Peace Boat, another Tokyo-based nonprofit group.

On Monday, Japan’s parliament passed a ¥2 trillion second supplementary budget for disaster relief, intended to help local governments and businesses until another larger budget can be enacted. But Arakawa isn’t hopeful of support anytime soon.

The government’s sometimes muted response has cultural roots dating back to the social system of pre-modern Japan, Arakawa said, when the four groups called “shi-nou-kou-shou” referred to the samurai, the farmer, the engineer and the merchant. The government considered the merchants’ role of profiting from others as inherently unfair, and left them to fend for themselves.

But sometimes, merchants helped other merchants, and this tradition still holds true.