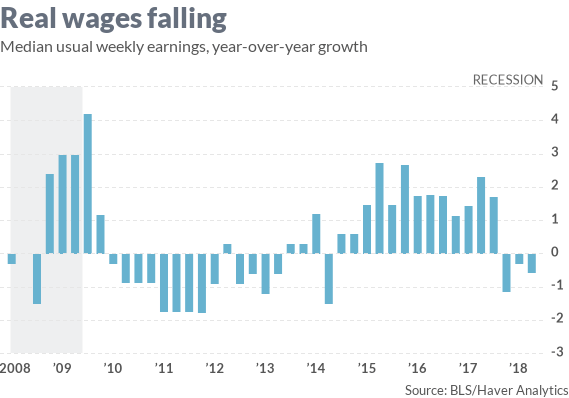 According to the Labor Department, median weekly earnings fell 0.6% in inflation-adjusted dollars in the second quarter, compared to the same time period of 2017.

The issue of inflation-adjusted wages stagnating came up in the hearing with Federal Reserve Chairman Jerome Powell on Tuesday. He was asked by Sen. Sherrod Brown, the Ohio Democrat, whether the typical worker really is better off than he or she was a year ago.

Powell said the typical worker was better off. “I would say that the labor market has strengthened. The labor report will show that wages went up 2.7%, that’s significantly higher than trend inflation. There is a bit of a bump from gas prices going up, and consumers do pay that. But I would say workers are better off.”

The difference lies in which measures of both pay and inflation are used. Powell was citing average hourly earnings, and not median weekly earnings. He was also referring to inflation as measured by the PCE price index, and not the consumer price index, which the BLS uses to compute real average wages.

In a report last week, the BLS said real average wages were unchanged over the previous 12 months.

In the report on median earnings released Tuesday, women were earning 81 cents for every dollar a man made.

Among the major occupational groups, persons employed full time in management, professional, and related occupations had the highest median weekly earnings — $1,463 for men and $1,080 for women. Men and women employed in service jobs earned the least, $615 and $512, respectively.

Those with advanced degrees made 63% more than the median worker’s $876, while those with less than a high school diploma earned 40%.