Bulletin U.S. trade deficit in goods widened by 3% to a record $101 billion in December »
Investor Alert

Other people in jobs like his should think twice about cheating 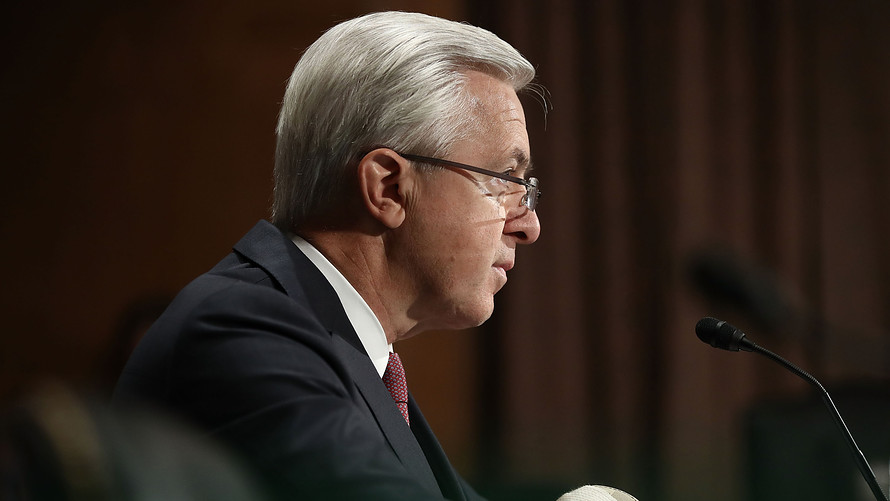 None too soon, John Stumpf is out of his job as CEO of Wells Fargo, propelled into retirement by a scandal that did incalculable damage to the bank’s image as the Big Six bank that doesn’t cheat.

And the details provoke a most-unfamiliar feeling: Wall Street got something right for once.

Wells’ board let Stumpf, 63, retire rather than be fired, but it doesn’t take a genius to figure out that the boss was taking the fall for Wells Fargo (NYS:WFC)  employees opening a reported 2 million unauthorized customer accounts, generating $2.6 million in unwarranted fees by CLSA analyst Mike Mayo’s estimate. Wells had fired 5,000 workers for the offenses over five years. But a problem that large and long-lasting, especially one that happened because workers were struggling to meet sales quotas imposed from on high as part of a corporate strategy, accountability needed to be had at the top.

And now it has been. Wow.

“Wells Fargo is bigger than the CEO. The framework of the culture remains strong so long as there are better checks and balances going ahead.”

The best part is that the episode is costing Stumpf personally a huge multiple of the gains it generated. The company has already paid $185 million in settlements, and Stumpf is giving up $41 million in unvested stock compensation. The penalty, let alone the humiliation Stumpf has gone through in the past two months, should make people in jobs like his think twice.

Compare this to what happened at AIG (NYS:AIG) , where the jokers who caused the insurance giant’s $173 billion federal bailout were rewarded with hundreds of millions of dollars of bonsues so they would stick around long enough to clean up their own messes. Or how John Thain and Stanley O’Neal walked away from Merrill Lynch’s carnage unscathed after it collapsed into Bank of America’s (NYS:BAC)  arms. And let’s not even get started on Countrywide Financial’s Angelo Mozilo, even if he did pay a $67.5 million settlement to walk away from the mess he made in driving America toward the 2008 mortgage crisis.

Wells Fargo is going to be OK. Along with Stumpf’s departure, the company announced plans to shrink its network of about 6,100 branches — a move Mayo said could boost earnings by 12% if Wells moves aggressively. That’s a welcome adjustment to the new, more-realistic growth expectations for revenue now attached to San Francisco-based Wells, America’s second-largest bank. The goal is to maintain profits by containing expenses, as Wells shifts more of its business to digital channels that cost less to run, while eliminating the sales quotas that caused the problem.

Morgan Stanley (NYS:MS)  even suggested the resolution will help Wells attract investors from the corporate-responsibility community, known as ESG for environment, social and governance, as it split the CEO and chairman roles to boost accountability.

“Our Sustainable + Responsible Investment research team have highlighted before that investors seeking governance practices in line with shareholders’ best interests should focus on board independence and executive compensation,” among other factors, Morgan Stanley analyst Betsy Graseck wrote. “Split[ting] the role of chairman and CEO, and the board’s actions last month to claw back compensation from both John Stumpf and former head of retail, Carrie Tolstedt, work toward addressing these demands.”

This is pretty obviously a better alternative than for Wells to try to change what it does by veering away from its Main Street roots in commercial and consumer banking. With interest rates as low as they are, and likely to rise fairly significantly in the medium term, it’s not exactly the right time to make a much-expanded commitment to bond trading.

Ditto for mergers: Mergers and acquisitions activity in North America is expected to drop nearly 40% from last year’s record pace (that’s measured in dollars; the number of deals is set to drop 12%), according to the Institute for Mergers, Acquisitions & Alliances .

“Wells Fargo is bigger than the CEO,” Mayo said. “The framework of the culture remains strong so long as there are better checks and balances going ahead.”

Wells announced earnings Friday, and they suggest that the scandal hadn’t sunk the ship or even damaged it much. Earnings per share of $1.03 beat average analyst estimates by 2 cents, and revenue of $22.3 billion was also a little better than forecast. Both revenue and profit were about 2% lower than last year, but in a low-interest-rate environment, that’s hard to avoid.

So by the standards of Wall Street scandals, we have a mostly happy ending.

The company did the right thing a little more slowly than critics demanded, but removed Stumpf and former consumer-banking head Tolstedt before the damage to Wells’ consumer-friendly brand affected the business much. Lawsuits have been filed, but they’ll settle for a few million dollars given the small size of the ill-gotten gains. A criminal probe isn’t likely to lead to much, Mayo says.

Now Wells can go back to business. And sin no more.